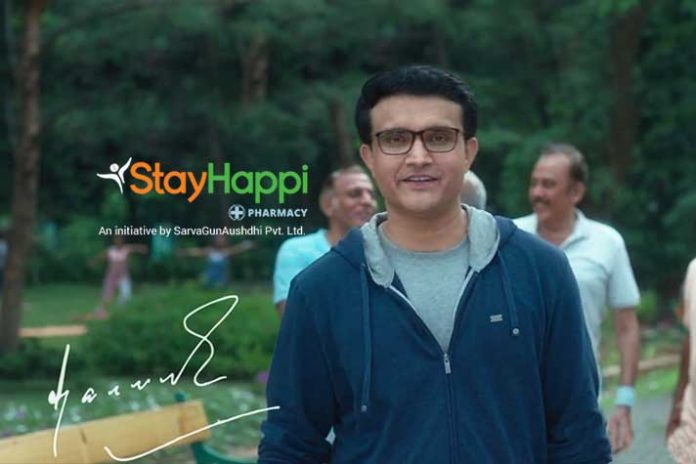 Sourav Ganguly has inked a brand endorsement deal with the low-cost medicine brand StayHappy Pharmacy. Ganguly will be the face of the company that will be promoting low-cost generic medicine as part of its mission as described by the Dada as ‘Make In India’.

StayHappi Pharmacy, an initiative of Sarva Gun Aushdhi, which was incepted with the aim to serve humanity by providing high-quality medicines at affordable prices, has announced Sourav Ganguly, former captain of the Indian national cricket team, as the brand ambassador.

The commercial revolves around how generic medicines are more affordable as they are sold by molecule name and not by the brand name.

Sourav Ganguly said, “I am delighted to be associated with StayHappi Pharmacy as it is an initiative that supports ‘Make In India’ mission and provides medicines at affordable rates. In a country like India, this initiative is game changing as we have thousands of people in our nation, who lose their lives due to lack of affordable medical services.”

StayHappi managing director Dr Sujit Paul mentioned, “StayHappi’s initiative is to provide generic medicines at genuine and affordable prices to the huge population base struggling for essential medicines every day. I truly believe that our association with Ganguly will seek to establish and achieve exactly that.”

“The TVC combines elements of infomercials within itself. The tagline aptly describes our aim and spreads awareness about the availability of generic medicines,” Paul added.

The company recently forayed into the Indian pharmaceutical market with the launch of its first pharmacy in New Delhi. It soon plans to expand its reach across cities like Mumbai, Bangalore, Chennai, Hyderabad, Kolkata, Ahmedabad, Lucknow, Bhopal, Patna, and Bhubaneswar. It has plans to establish around 15,000 retail pharmacies by 2022.