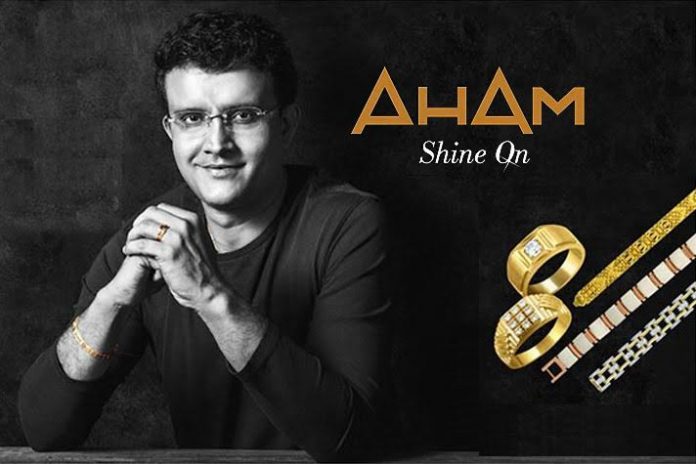 Senco Gold & Diamonds brand ambassador for nearly five years, Sourav Ganguly will be the face for its jewellery range for men – AHAM.

The nationwide gold and diamond jewellery chain has rolled out a new brand campaign “Shine On” with Ganguly to promote its new AHAM range of jewellery for men.  Ganguly will be playing his own self, exhibiting how he outplays rivals and silences the critics.

AHAM, the new men’s collection offers a signature collection of rings, bracelets, cufflinks, ear-studs, chains and pendants in diamond, gold and silver. The collection has been designed especially for the cosmopolitan man; urbane, dignified and grounded. This Signature range can be used as part of daily wear as well as in social occasions or for sheer power dressing by the men of honour.

“Sourav Ganguly is our brand ambassador since 2015. He embodies the spirit of AHAM, which celebrates the man who has that sharp edge over others, who dazzles the world with his success. People may criticise him, but his outstanding performance silences the critics. His brilliance lets him rise above mediocrity. For him, a century is not enough. Even his rivals admire him when he outplays them. He is not afraid of failure because he excels beyond expectations. He is equally versatile, excelling at whatever he does in his own unique style, with impeccable class and elegance. This is the spirit of Aham, which means “self” or “ego” and Sourav Ganguly represents every self-made man who is comfortable being himself and letting his “aham” shine,” said Suvankar Sen, Executive Director, Senco Gold & Diamonds.

Expressing his views on the campaign, Ganguly said, “I am very much excited with the new range of jewellery collection, AHAM. I am not new with this brand as my association with Senco Gold & Diamonds dates back to 2015. All the collections are uniquely designed by karigars. The new collection embodies the spirit of self-confidence along with the desire to succeed. It gives me immense pleasure to be associated with such an eminent jewellery brand.”

The idea of the campaign is based on the persona and the charisma of a gentleman who is always shining brightly.  The tagline “SHINE ON” signifies the inherent encouragement to become successful.