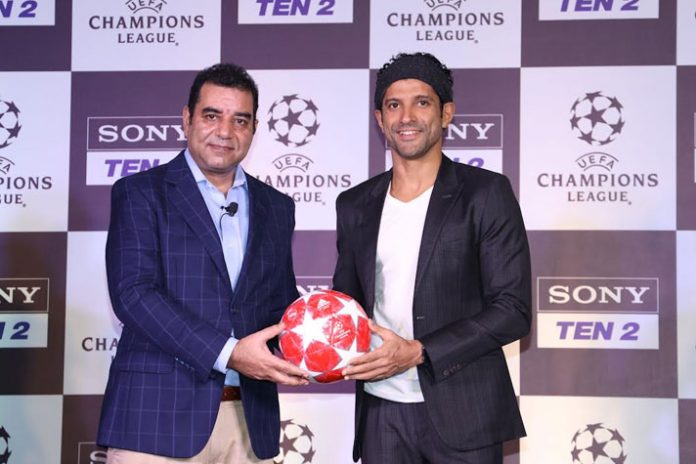 Sony Pictures Sports Network along with UEFA’s official guest from India Farhan Akhtar has kicked off a series of exciting activities leading up to the build-up of the most awaited UEFA Champions League finals.

In an endeavour to bring a larger than life experience to football enthusiasts in India, Sony Pictures Sports Network in association with PVR Cinemas, will for the first time, be screening the UEFA Champions League finals LIVE on the big screen, across five cities in India. Football fans from Mumbai, New Delhi, Pune, Kolkata and Chennai can enjoy the clash of the titans with friends and family at PVR cinemas near them.

As a build-up to the knockout stage of the tournament, Sony Pictures Sports Network has launched the ‘My Reasons to Watch UEFA Champions League’ campaign. The campaign captures the enthusiasm and passion of various kinds of fans, ranging from fanboys to peripheral football viewers who profess their reasons for watching the most prestigious club competition in the world, the UEFA Champions League.

To further enhance the viewing experience for audiences the sports network will also feature a ‘UEFA Champions League Studio Show’ with a host of expert panelists on board, presenting in-depth pre, mid and post-match analysis.

Rajesh Kaul, Chief Revenue Officer, Distribution and Head – Sports Business, Sony Pictures Networks India, said, “As the premier destination for football we are curating an immersive fan experience for one of the grandest sports finales of 2019. The UEFA Champions League is not just a football tournament; it is a culmination of the top European clubs vying for the coveted title. The tournament experienced a considerable jump in viewership and we have seen a 79% growth over the previous season which is a testament to its popularity. We are delighted to associate with UEFA’s official guest from India, Farhan Akhtar, whose passion for sports has inspired millions.”

With just four teams left in the race to the finals, UEFA Champions League 2019 is nearing a thrilling climax and Farhan will be present at the stadium, giving a new dimension to the event for the fans in India.

Meanwhile, Bollywood actor  Farhan Akhtar will be heading to watch the finals of the tournament at the Metropolitano Stadium in Madrid, Spain on June 1. Fans can watch the second leg of the UEFA Champions League semi-finals and the finals live and exclusive on SONY TEN 2 and SONY TEN 2 HD channels.

Farhan Akhtar, UEFA’s official guest from India, said, “I have grown up watching and playing football and I am thrilled to be UEFA’s official guest from India. The UEFA Champions League, telecast on SONY TEN 2 channels, is the most prestigious international club tournament in the world. Getting the opportunity to watch the UEFA Champions League Final match live at the stadium, surrounded by thousands of passionate fans and soaking in the electrifying atmosphere is going to be an unforgettable experience. I will be posting all about it on Twitter and Instagram so that fans can follow all the action with me.”