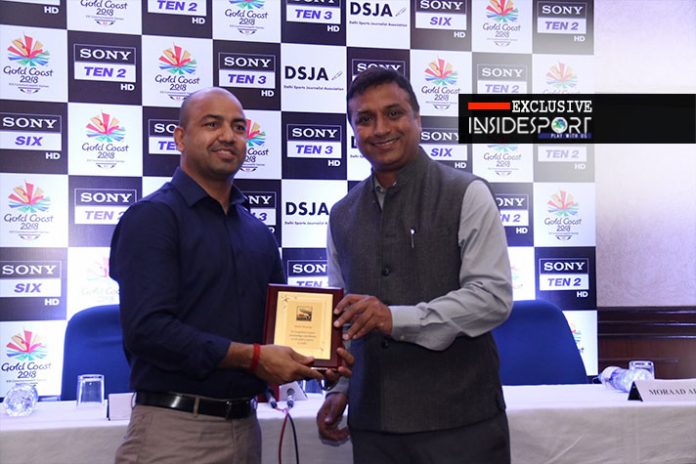 The broadcaster to tune-in for the Indian Premier League live action for all the ten years, Sony Picture Sports Network this season will be looking for a counter-offensive as the key rival is all set to drive home the IPL advantage.

As the IPL host broadcaster and Sony TV rival gear up for an all-new 2018 season, Sony Picture Sports Network this year will be bringing to the Indian sports audience live action of the multi-discipline Commonwealth Games from Gold Coast, Australia. There will be close to two action-packed weeks, 150 hours of live broadcast and much more to spice up the appetite of Indian sports lovers.

Speaking exclusively to the Insidesport.co in the Capital, on the sidelines of an event hosted to “send good wishes to the Indian CWG contingent, Kedar Teny, senior vice president, marketing and OAP, Sony Pictures Sports Network, candidly talked about various aspects of the broadcaster’s content, marketing and sports strategy.

Here are the excerpts:

InsideSport: Sony for the past 10 years would sweep the Indian Television sports genre viewership ratings during the Indian Premier League. This year you are on the other side of the table. What will be your counter-offensive this season when the rival is all set to drive home the advantage?

Kedar Teny: Sports is not just one event. There are many facets to sports and as the sport is evolving in the country. Look at the amount of curiosity multi-discipline Commonwealth Games are generating. We are today an 11 channel network which covers the spectrum of world’s best sporting action whether it is basketball, football, high-octane combat sports or multi-discipline global events. We are still pretty much the home of cricket with seven international boards with us. These are exciting times for us. Right from early morning to late night the network is budging with catering to different demands to different kind of viewers who are expecting different excitement from different sports.

IS: Still, from the pure marketing perspective how will you define cricket versus the rest of the sports?

KT: Cricket is a religion in this country. We are here to also develop other sports. People have an appetite for other sports as well. Sony is here to promote a multi-sporting culture in the country.

IS: What kind of broadcast numbers will Sony be expecting from the Commonwealth Games?

KT: It is too early and premature to talk about numbers as I said this is more about market development. Multi-discipline sports are at a nascent stage in India. We are here to fuel the appetite for a multi-sporting culture in the country.

IS: How about the CWG marketing and broadcast strategy?

KT: We have just launched the ‘Rang de Tiranga’ campaign, which is a very interesting device where we have used cricket’s most recognisable fan for urging people to come out and support the country in other sports as well. This is a great clarion call to have on ‘Rang De Tiranga’.

In terms of programming, we have got 150 hours of live action on the Commonwealth Games coming in from Gold Coast. The timing is absolutely perfect as it starts at 4.30 in the morning and goes well beyond 4.30 in the evening. There will be 13 to 14 hours of live action every day except for the opening and closing day, which will be a three-hour coverage on either side of the grand event. So Commonwealth Games on Sony will be the full-day action. Then there will be non-live content and the studio shows.

IS: What is your marketing pitch for CWG?

KT: We have launched the clarion call ‘Rang De Tiranga’. We want you to go there and support your team. You will find this campaign on OOH, radio, on print, digital. There is CWG specific programming and programming integrations.

IS: From CWG to cricket. Sony has seven cricket boards under its belt. What about the eighth and the most important one – the BCCI, the media rights allocation process is currently on?

KT: We are keen on these rights. Sony is bidding for the BCCI rights. That’s all I can share at this stage.

The Gold Coast Commonwealth Games, slated from April 4 to 15. Sony will broadcast the multi-discipline Games live and exclusive for Indian sports lovers.