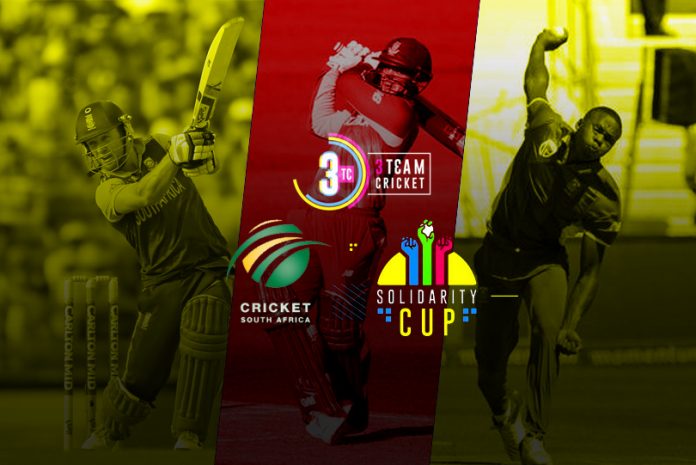 Cricket fans across South Africa can look forward to finally witnessing some live action this weekend when the inaugural 3TeamCricket presented by Rain, takes place in Centurion.
Although the format is new – three teams will play in a single match and compete for the inaugural Solidarity Cup – it still brings with it plenty of hope that amidst the dark clouds of the COVID-19 pandemic, there is light at the end of the tunnel.
Solidarity Cup LIVE : The squads for 3TC are:
Mr D Food Kites: Quinton De Kock (captain), Temba Bavuma, Jon-Jon Smuts, David Miller, Dwaine Pretorius, Lutho Sipamla, Beuran Hendricks, Anrich Nortje. Coach: Wandile Gwavu.
OUTsurance Kingfishers: Kagiso Rabada (captain), Reeza Hendricks, Janneman Malan, Faf du Plessis, Heinrich Klaasen, Gerald Coetzee, Glenton Stuurman, Tabraiz Shamsi. Coach: Mignon du Preez.
Also Read: Solidarity Cup still on despite 6 Covid19 positives, Star Sports to broadcast
Takealot Eagles: AB de Villiers (captain), Aiden Markram, Rassie van der Dussen, Kyle Verreynne, Andile Phehklukwayo, Bjorn Fortuin, Junior Dala, Lungi Ngidi. Coach: Geoffrey Toyana.
Mr D Food Kites all-rounder, Dwaine Pretorius concedes that he is still coming to terms with the rules.
“What I do know is there’s three teams, I know they’ll each face 12 overs and I know the one with the most runs wins,” he conceded. “There’s obviously six fielders and the last batsman stands. It’s fun being a part of something new and fresh, the learning is half the fun of it all. I’m sure in the training match on Thursday we’ll see practically exactly how everything works.”
The match, which takes place on Nelson Mandela International Day this Saturday, is the first time that the players will be returning to the playing field in live cricket action since the middle of March when the coronavirus forced most of the world into lockdown.
“We’re very excited to get back onto the field,” Pretorius says. “After such a long time off it, everyone is just really excited to be back.
“In a way it is a little bit bitter-sweet because after this we don’t know when we’ll be back again, but for now we’re just looking forward to this opportunity.”
The Kites team, captained by Proteas limited-overs skipper Quinton De Kock and coached by Imperial Lions head Wandile Gwavu, have every chance of winning on Saturday, according to Pretorius.
“I think all three sides are strong, so it’s going to be exciting cricket,” he added. “Our side as well, we’ve got a good chance of competing for that trophy.”
One major void for a game that is also raising funds for the Hardship Fund – aiming to provide relief to those within the cricket industry affected by the current pandemic – is that there will be no fans at SuperSport Park. The contest will be beamed on SuperSport 2.
Solidarity Cup : Pretorius does not foresee this being a problem.
“I play a lot of domestic cricket where there are not many fans, so for some of the players it will be similar,” he explained. “We’re used to that. But for the regular internationals it will be something they’re going to have to get used to. They’re generally used to playing in front of big crowds but we’ll all have to adjust and take in what is expected to be the new normal for the near future.”
The 3TC match is contested between three teams of eight players each. The match is played over 36 overs in two halves of 18 overs with a break at halftime. In the second half, teams bat in order of the highest scores in the first half. If scores are tied, the first half order is reversed.