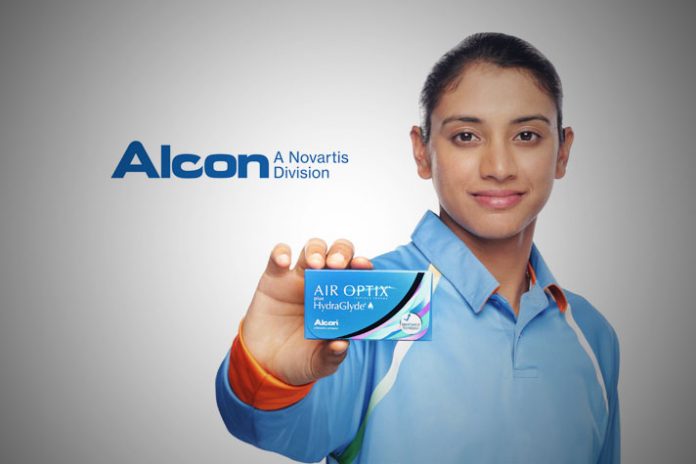 India Women’s cricket team swashbuckling opener Smriti Mandhana will be the face for Alcon.  Alcon, a division of Novartis, announced that they will be working with Mandhana for their new product innovation – AIR OPTIX plus Hydra Glide contact lenses. Mandhana will feature in the brand campaign designed to recognise and celebrate the everyday struggles and successes of people to reach their dreams. She will demonstrate how the attitude of ‘Never Compromise’ enables people, teams and organizations to realise their true potential.

“We are excited to have Smriti Mandhana as the Brand Ambassador for AIR OPTIX®, our monthly portfolio of contact lenses. Smriti refused to compromise on her dreams, or settle for anything less. She was not ready to compromise on either her clarity of vision or her vison for life. Her choice to use Alcon’s AIR OPTIX® plus HYGRAGLYDE® lenses that provide exceptional, long-lasting, all-day comfort1-6 reflects her attitude of ‘Never Compromise’,” says Panchali Upadhaya, Country Business Unit Head, Alcon Laboratories India Private Limited.Coming from the small town of Sangli in Maharashtra, Smriti battled formidable odds to pursue her passion. She took inspiration from her cricket playing brother to sign up for cricket trials at the age of nine. She quickly made it to Maharashtra’s Under-15 team at the age of nine and Under-19 team, when only eleven. Smriti made a 50 on Test debut, playing a crucial hand in India’s historic Test win in England in 2014. She became the second Indian cricketer to feature in a foreign T20 league, scored a World Cup century, another one in Australia, and a double ton in domestic one-day competition.

“In life vision is everything. I was always clear in my vision that I wanted to play cricket. And I was not ready to compromise” says Smriti. “That’s why I switched to using AIR OPTIX® plus HydraGlyde® contact lenses. They allow me to see clearly and comfortably, without interruption, and let me focus on doing what I love. I chose to ‘Never Compromise’”

Mandhana in the beginning of the year was appointed as brand ambassador for BATA in India and is ending heart 2018 will this new brand endorsement deal.
Also Read: Baseline Ventures signs India opener Smriti Mandhana