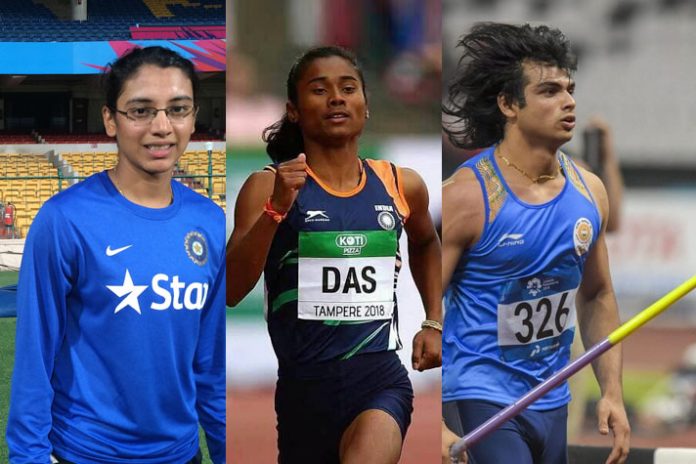 Indian women cricketer Smriti Mandhana, ace gymnast Hima Das and javelin thrower Neeraj Chopra are the ace sportspersons to make the grade in Forbes ’30 under 30 – the list of leading 30 achievers for 2019 in the under-30 age group.

The laurel for Smriti comes close on the heels of her emergence as the No. 1 batter in the International Cricket Council ODI rankings for women. The Mumbai girl has been in top for on the Indian girls tour of New Zealand.

The 19-year-old sprinter Hima Das, nicknamed the “Dhing Express”, holds the current Indian national record in 400 metres with a timing of 50.79 s that she clocked at the 2018 Asian Games in Jakarta, Indonesia. Also last year, Hima has also become the first Indian athlete to win a gold medal in a track event at the IAAF World U20 Championships.

Neeraj Chopra is among India’s medal prospects for the Tokyo Olympic Games next year. The 24-year-0ld Panipat boy had returned with gold medals from the Gold Coast Commonwealth Games and the Jakarta Asiad last year. His 88.06 metre effort in the 2018 Asian Games is a national record now. He also had the honour of carrying the Indian flag at the opening ceremony on his maiden appearance in an Asian Games.

Forbes chooses these achievers on the basis of four broad criteria across 16 categories: the impact of their achievements, their ability to disrupt the environment they operate in, the scalability of the business or line of work, and their potential to stay a long-term talent.

Forbes uses a three-pronged approach to determine the list of achievers. The methodology includes interviews by the Forbes India team with sources across relevant categories  studies of databases and media coverage. Candidates who fit the criteria have to submit their applications online on forbesindia.com. Or, the candidates may also be nominated. And then social media is used as the other tool to arrive at the final list.