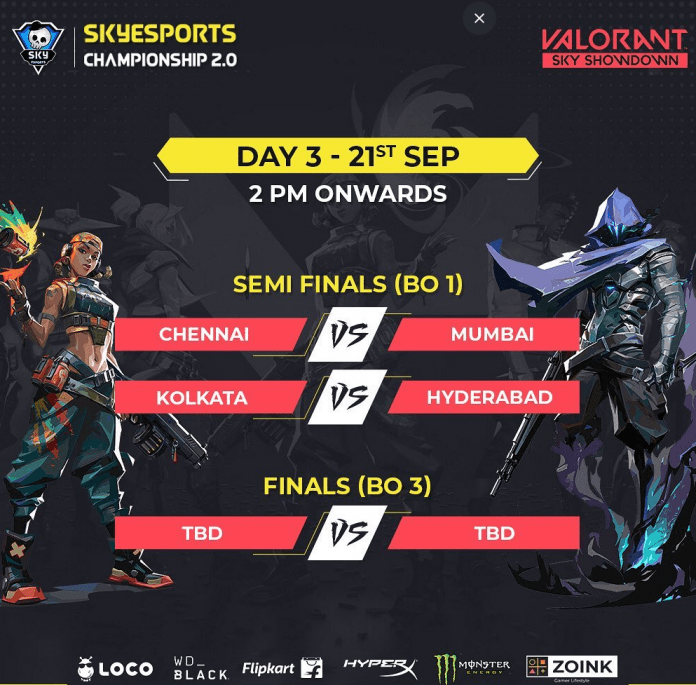 On Day 2 of the VALORANT SKY SHOWDOWN, best of one matches, saw teams giving it their all to stay in the tournament, hoping to take a piece of the 1.5 Lakh + WD Black Product + HyperX Product + Flipkart EGVs.D. All warmed up from yesterday we witnessed more one taps than we thought. Teams Mumbai, Hyderabad, Chennai and Kolkata will be moving to DAY 3 as the rest of the teams are knocked out. Here’s how DAY 2 played out.

The Day started off with Team Bengaluru losing to Team Mumbai. Rebel and Thug from team Mumbai, also Nightmrezk from team Bangaluru had both contributed massively to their teams on day one with 28 kills each.

The game was dominated by Team Mumbai, as expected Rebel and Thug dominated with 21 and 16 kills respectively as they one tapped the opponents, winning the game with a score of 13-2. The only two rounds Mumbai dropped were at a score of 12-0 which had crushed all hopes of the fans rooting for Global esports. Global Esports had made a massive comeback yesterday but today after a point in the game there was no comeback.

Team Noble(Delhi) were sent home by Oresports. The game looked like a comeback but Noble were not able to pull it off. We had high expectations of Team Noble but their loss is understandable as the team was formed very just a few weeks ago.

Team Hyderabad gained a two round lead as attakers on HAVEN. Post side change the Team Hyderabad continued their momentum to win 3 rounds back to back. Noble held their ground thereafter only to lose the game at 10-13 even some sweet headshots from Hikka.

Rafaaa of TEAM TAMILS purely dominated this game with the help of his teammates Flexx and Stoner. Team RAJHASTAN(ENTITY) were knocked out of the tournament to a score of 13-7 on the map ASCENT. Entity scoring even 7 points was great to watch as they were the underdogs of the tournament.

In 6 rounds we saw Rafaa rush and take first blood on the Agent Phoenix, his spell usage too was on point allowing him to carry his team.

On HAVEN again, as Expected the 2nd best team in Asia-Pacific, Velocity gaming dominated Team Punjab to win 13-4 on the fourth game of the day.

Antidote did not hold back as he one tapped opponents in a serial fashion, dying only 7 times he had 50 avg. combat score above his teammate Vibhor.

Coming up on DAY 3 we have Chennai vs Mumbai also Hyderabad vs Kolkata, Which will conclude with a BO3 finals. Team Kokata seems the strongest among the 4 teams left. Let’s see if Team Hyderabad or Mumbai can surprise us tomorrow.

VCT APAC Last Chance Qualifiers: Riot Games shares the reasons to give those two vacated slots to Korea and Japan instead of South Asia