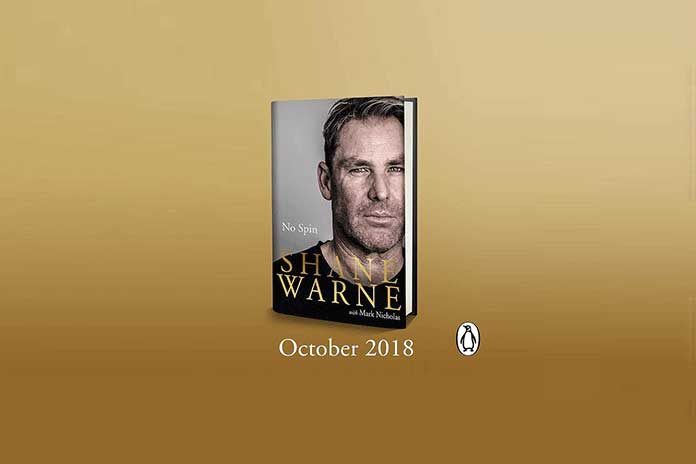 Shane Warne autobiography ‘No Spin’ is all set for October 4 global release.

“People will finally hear the truth!”

“The time has never been right to release my life story for a variety of reasons – but I feel it is now.”

The pointers in social media shared by Shane Warne as an indicator about what his autography NO SPIN holds suggest that there will be few googlies as the Australian spin wizard reveals the twists and turns of his life para by para, page by page, chapter by chapter.

The 48-year-old will share the secrets and facts of his life, going beyond the boundaries, in the autobiography titles No Spin, which is scheduled to release worldwide on October 4. The last word on Shane Warne’s extraordinary cricketing career and his life off the pitch will also reveal the “true stories behind the headlines”.

Warne will talk about his extraordinary cricketing career and his life off the pitch besides unveiling several unknown facts in the autobiography which will be published this October.

Ebury Press today (Monday) has announced that Warne’s memoir “No Spin” will have a global release on October 4, adds PTI.

“No Spin” is the true story behind the headlines, in Warne’s own voice, and challenges some of the enduring myths and untruths that surround him. Uncompromising and compelling, it is destined to rank alongside some of the greatest sports autobiographies ever, the publisher said.

Andrew Goodfellow, a deputy publisher at Ebury, said, “Despite all the pain he’s inflicted on us over the years Shane Warne is still one of the most admired and celebrated cricketers to a British audience.

“You simply can’t imagine the game without his unique contributions. I think his insight, no-nonsense honesty and strength of voice will make this the most read cricketing autobiography in years. At Ebury, we are all very excited and honoured to be publishing such a legend.”

Also Read: This athlete leaves a film role despite being hit in her autobiography!

The memoir is written with cricketer and TV presenter Mark Nicholas.

Warne’s mesmerising bowling prowess coupled with his personal life (which has long been fodder for the tabloid press) has made him one of the world’s most illustrious sportsmen.

Born on September 13, 1969, Warne is widely regarded as one of the finest bowlers in the history of the game. He played his first Test match in 1992 and took over 1,000 international wickets (in Tests and One-Day Internationals).

A useful lower-order batsman, Warne also scored over 3,000 Test runs. He played domestic cricket for his home state of Victoria, and English domestic cricket for Hampshire. He also captained the Rajasthan Royals to victory in the IPL in 2008. He officially retired from all formats in 2013 and currently commentates for Foxtel.