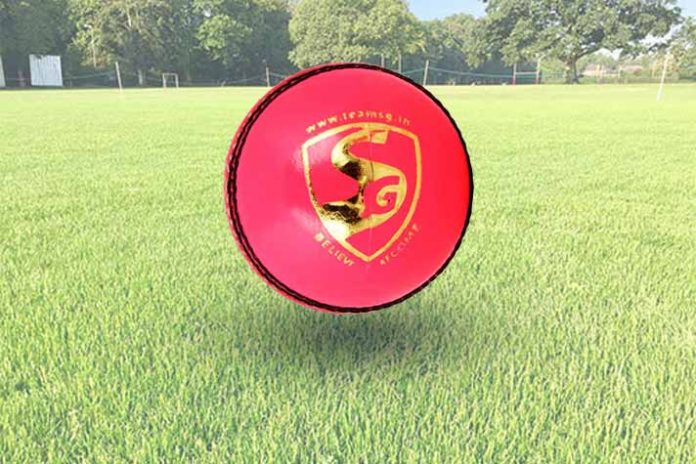 Sanpareils Greenlands, manufacturers and official suppliers of the SG Test balls to the Board of Control for Cricket in India, will provide 72 pink balls for the Kolkata Test against the visiting Bangladesh team.

The Test at the Eden Gardens, Kolkata, will be played under floodlights from November 22 to 26.

A day after Sourav Ganguly had stated his preference for the SG Pink balls for the first day-night Test in India, the BCCI has asked the Meerut-based leading cricket gear manufacturer to provide six dozen pink balls.

Paras Anand, Marketing Director, SG, had on Tuesday confirmed to insidesport.co that SG were well equipped and ready to provide ‘pink balls’ for the day night Test within a week’s time. The company now had been asked to provide the consignment in Kolkata by next Thursday.

Anand had also confirmed to the insidesport.co that the company had already completed all its research and development and the ball had successfully passed the trials, since SG  had been working on the development of the pink cricket ball since 2016-17.

Also read: Ready to provide pink balls as and when BCCI wants

Dew and the lighter coloured-balls lasting up to 80 overs have been a concern for day-night Test matches in India. Players had encountered problems during the experiment with the pink balls for the Duleep Trophy when spinners had struggled to properly grip the “wet” ball after dew came into play. The Duleep Trophy games, however, were played with the Australian Kookaburra seems. SG balls relatively have harder and higher seam. That will give bowlers an edge over the Kookaburra or Duke’s balls, which have flatter seams.

Anand has confirmed that the company has received the order from the BCCI. “The BCCI has asked us to provide six dozen balls by the mid-week next week. The SG Test cherry ball has performed remarkably well in terms of hardness, bounce, quality. The same technology goes into producing the pink balls,” said Anand. “Pink being a lighter colour there were some issues. We had to ensure that the ball doesn’t lose its shade and there is no glare when the lights are on. We have already identified the right paint. All technical issues are already sorted. It’s just that the balls are to be produced and delivered.

“Coating process is different for the pink balls, which attract more dust. We have been aware of these concerns and have worked on that.”

SG already has about two dozen pink balls in stock and if the BCCI desires the company is also in a position to provide some used balls.