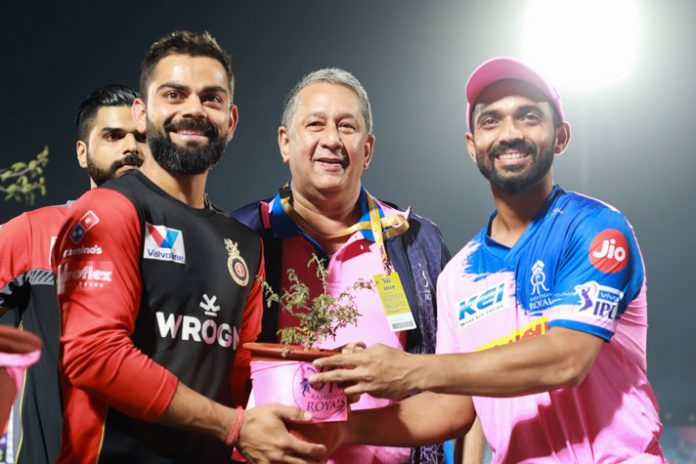 The Rajasthan Royals have established the Royal Amrita Devi Bishnoi Nursery with an aim to have a green Rajasthan.

Ahead of their home match against Royal Challengers Bangalore on Tuesday, Rajasthan Royals skipper Ajinkya Rahane presented a Khejri tree sapling to RCB skipper Virat Kohli to mark team’s commitment to support women as the driving force in bringing about a social change and also as good will ambassadors promoting sustainable living with minimalistic use of natural resources, primarily water.

Commenting on the occasion, Ranjit Barthakur, Executive Chairman for Rajasthan Royals said, “Women of India have always been the shining example of valour, integrity and resilience. One such dynamic persona has been that of Smt. Amrita Devi Bishnoi, who rose as a symbol of women’s empowerment, leading path for social and economic emancipation of women, along with highlighting the importance of ecological awareness among masses. She, alone had led a movement that inspired the famous Chipko Andolan.

“We are very thankful to Royal Challengers Bangalore team who have been consistently working towards creating a greener and healthier environment with their efforts. We are proud to be part of this initiative and taking it ahead at our home Rajasthan,”

The nursery will have a mix of Khejri and fruit bearing trees that can be further shared with women of Bishnoi community who can then plant these in their communities. The idea of the initiative is to create a sustainable value chain of spreading message of practicing sustainable use and development of the available resources which includes encouraging plantations and planting trees that are native and indigenous to the region, capable of thriving with minimum water supporting the rural women folk in leading a self-sufficient life.

Back in 1730 AD, Late Amrita Devi from a small village Khejarli in Rajasthan started a war to protect sacred Kheri trees. The Bishnoi lady sacrificed her life along with her three daughters to save the trees from being cut. Her sacrifice empowered the community and people from village also raised their voices for the cause.  Later on the incident became the inspiration for the Chipko Movement.