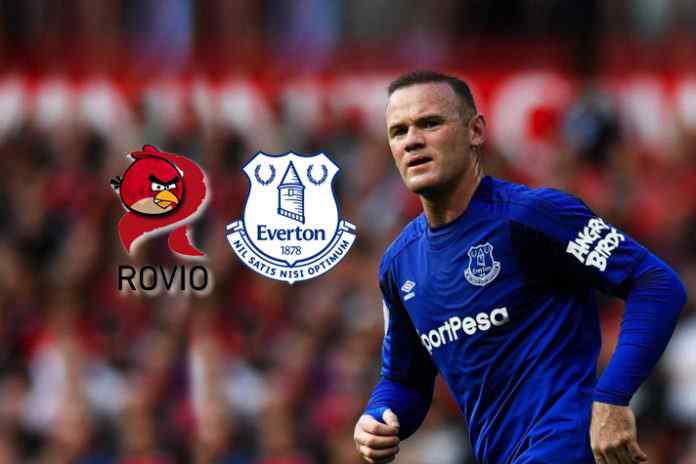 Angry Birds, the online game, has got on the shirt sleeves of Everton football club players. The deal may now take the Wayne Rooney and his club-mates into the popular online game.

Everton, after the Premier League clubs were allowed to sell shirt sleeve sponsorships for the first time this season, have signed a deal with gaming giants Rovio.

The Angry Bird game developer has reportedly decided to make former Manchester United striker Rooney a character in their game. Everton is expected to feature in a new version of Angry Birds in the future.

“We have a history of doing Angry Bird homages of real-life characters so obviously now we are in collaboration (with Everton) we can work together to bring interesting characters and profiles into the games,” says Ville Heijari, Rovio Entertainment’s chief marketing officer. “Potentially Wayne Rooney would be involved. It is not just enough that we reach mobile players; we want to reach sports fans, television spectators, so it is a big audience we are going after.”

If Rovio is targeting the huge Everton fan base for their game featuring the club icons, there seem few buyers for the idea at least for now. Many Everton fans have been upset due to the game’s main character being a red bird as red is the colour of rivals Liverpool. Even though, the club has also been congratulated for the deal.

Everton fans in the past have taken to social media to object to manager Ronald Koeman’s choice of festive decorations after he had tweeted a picture of his Christmas tree covered in red.

The deal, as reported by media in England, is the latest in a series of Everton contracts which have raised £80-90 million ($110-120m) in revenue over the last two years, which is significant despite the unprecedented influx of television money.

“For us this is a real plus in that we have been able to secure a brand of the level of Rovio with the level of brand awareness they have and the undoubted market-leading following they have,” said Everton’s head of commercial Alan McTavish. “It (shirt sleeve sponsorship) has been a really competitive marketplace and there have been deals done across the league at different levels but we are confident we have done the best of them all.”

Five versions of the Angry Birds game since 2009 have had 3.7 billion downloads, three billion YouTube views and 25million Facebook followers. These numbers put Angry Birds among the top 100-grossing games on the Apple platform in the USA. Everton is expecting a similar exposure can do wonders for them as has been Rovio’s history of global collaborations with the likes of Apple, Sony, Fox, NASA and McDonald’s.