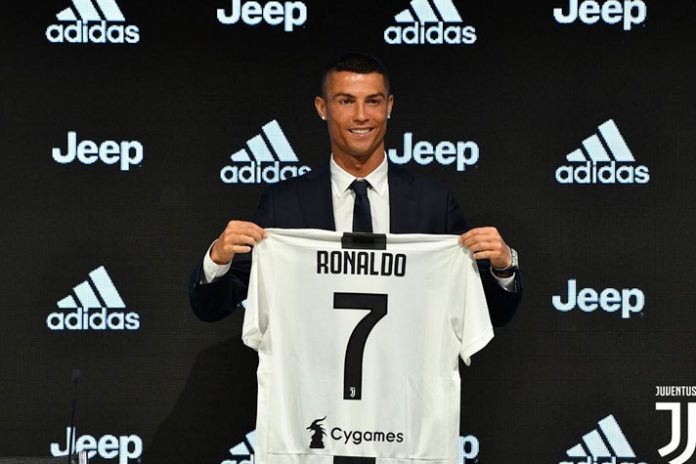 Cristiano Ronaldo has moved to Juventus for “happiness” and not for money. Ronaldo himself went on record to say that money is not the main criteria for his move from Real Madrid to Juventus. He has opted for the Serie A club Juventus for happiness.

Ronaldo, speaking during his customary unveiling at his new club Juventus in Turin, has claimed that he had moved to the Italian Serie A club for “happiness” as he was “different” than others who move to China or Qatar for money.

Ronaldo has vaingloriously said that he’s “different” from other players of his age who move to China or Qatar for mega-money deals, during an official unveiling as a Juventus player in which he said he wanted to help bring Champions League success to his new club.

The talismanic striker’s € 100 million ($117 million) move from European champions Real Madrid to Serie A giants shocked the football fans during the FIFA World Cup 2018 that concluded on Sunday, as much as Portugal’s ouster from the tournament. The four-year deal will fetch him an annual salary of € 30 million ($35.09 million).

“I’m different from other players who think their careers are over when they’re my age,” the 33-year-old Ronaldo is quoted as saying at his unveiling event. “I want to show that I’m not like the others, I’m different. The numbers are there, everyone knows what I’ve done for football, but I’m ambitious and I like challenges.

“I’m here because it’s a brand new challenge for my career. It’s a big club and usually players of my age go to Qatar or to China, with all due respect, so coming to such an important and outstanding club at this point in my career makes me very happy. That’s why I’m very grateful to Juventus for this opportunity because I can go on with my career.

“I’m going to try to show that I am a top player, as usual. I’m going to work hard in training … I am very ambitious and I like challenges. I don’t like to stay in my comfort zone. After the experiences in Manchester and in Madrid, I’d like to mark the history of Juventus.

“I hope I can give the best response on the field during matches, that’s what I can do. I hope I can take them to an even higher level. The nine years at Real Madrid were wonderful, but it’s a brand new step in my life, so I thank all the supporters with my heart,” Ronaldo said at a press conference. “But I have to focus on this next step. I’m looking forward to playing. I’m very motivated, concentrated and focused on that.”

Ronaldo further revealed that €100m move to Serie A club was the only offer he received and that moving to Turin was ‘an easy decision’.

Juventus sporting director Fabio Paratici said his club got the idea to sign Cristiano Ronaldo after his stunning bicycle kick against them in April. Then in Real Madrid colours, Ronaldo lit up the Champions League quarter-final first leg in Turin with two goals, including a sensational overhead kick in the second half.

The Italian champions, fresh from their Serie A triumph are hoping to end their coveted UEFA Champions League title drought since the last time they won it in the 1995-96 season. Juventus were a finalists in 2015 and 2017, beaten at the hands of Barcelona and Ronaldo’s former club respectively.

Ronaldo’s move from to Juventus has brought to an end his 9-year illustrious career stint at Real Madrid where he helped the club get 2 LaLiga titles, 4 Champions League titles and 3 Super Cup and 3 FIFA Club World Cup titles under their belt.

Ronaldo-Juventus deal: This is why club needs a Fiat ride to drive CR7 home