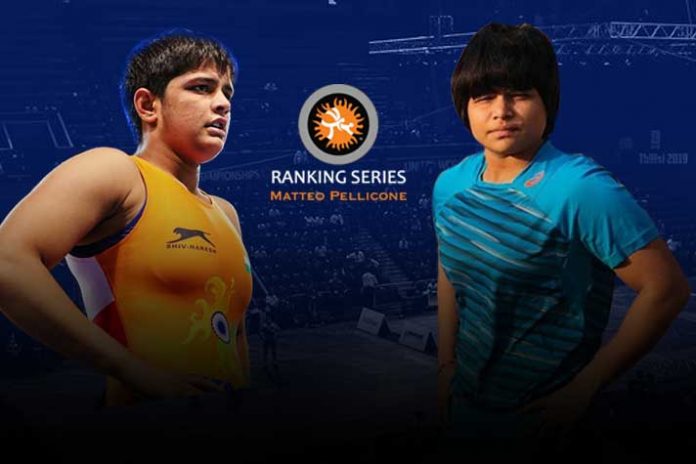 India has started the UWW Wrestling Ranking Series in Rome with a Greco Roman silver on Day One (Wednesday). After Vijay Kumar’s appearance in the 87kg Greco Roman final, Indian eves will start their campaign today (Thursday), the second day of the competition.

Four girls – Anshu Malik, Sonam, Divya Kakran and Kiran – are scheduled to take  to the mat today. India’s best promise of the glittering metal, Vinesh will be in action tomorrow (Friday).

Also in fray will be giant killer Sonam, the teen who had earned an India berth by toppling the seasoned Sakshi Malik.

Big test for Sonam and Anshu

India has landed in Rome with two debutants in the senior squad –  Sonam and Anshu Malik. The promising duo will begin their senior international career with the Rome Ranking series. Sonam has made it to the Indian team after shocking Sakshi in the WFI trials and will take on loaded field in the 62kg category that includes the likes of World medallists Tunbekova (KGZ), Ovcharova (Russia) and various others.

Anshu’s task in the 57 kg category will be more difficult as she may have to encounter world champion Linda Morais of Canada, world championships medallists Odunayo from Nigeria and China’s Rong Ningning in her weight group.

Divya Kakran in the 68kg category faces a tough after opponent in the 2019 world champion Tamyra Mensah of the USA.

The most challenging weight category of the Rome Ranking Series is 76kg where Indian Kiran Bishnoi will be in action. The field in the 76kg has nine world championship medallists including 5-time world champion Adeline Gray and Olympics champion Natalia Vorobyeva.

After Sunil Kumar’s silver medal winning performance on the opening night, India will also expect good performance from Asian Championship medallist Gurpreet Singh & triple world medallist Sajan in the Greco-Roman category. Both of them will be in action in the 77kg category.

All the action from the three mats in the UWW Ranking Series will be streamed LIVE and Exclusive in India by WrestlingTV. Fans can watch the bouts as and when these happen on www.wrestlingtv.in.

Indians in action on DAY2 of the Rome Ranking Series