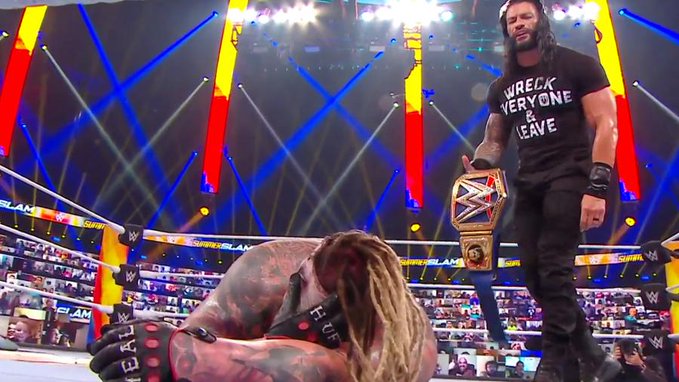 WWE SummerSlam Highlights: There is no bigger wrestling superstar at the moment in WWE than Roman Reigns. ‘The Big Dog’ Roman Reigns astounded everyone with his unexpected return at SummerSlam 2020 tonight in the main-event match.

Reigns who last seen on the WWE TV in the month of May before his Wrestlemania 36 match against Goldberg where Reigns denied to perform, since the outbreak of COVID-19 pandemic. Later that match happened between Goldberg and Braun Strowman at Wrestlemania 36 which Strowman won and crowned as the new champion.

With this monumental return of Roman Reigns now things have become easy to handle in WWE. The biggest WWE superstar now is looking for a championship rematch at Payback.

After the astounding ending of Bray Wyatt and Braun Strowman match tonight on SummerSlam in a ” Falls count anywhere” match. Bray Wyatt crowned as the new WWE Universal Champion after defeating Strowman in this colossal battle. After the match when everybody was hoping this is it – – from nowhere comes Roman Reigns and produced two brutal spears on Wyatt and Strowman respectively and made a major statement while holding the new Champion’s title in his hand.

This major statement only suggests that Roman Reigns is all set to face Bray Wyatt at Payback which is just 6 days from now for the Universal Championship match. However, it will be interesting to see what Roman Reigns’ return further holds in WWE.