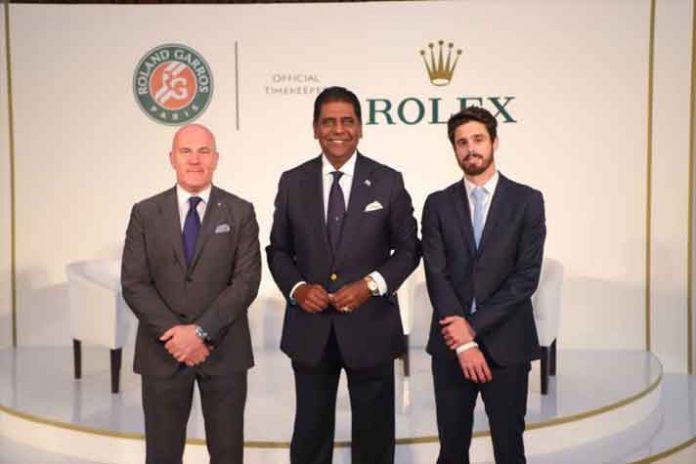 The Roland-Garros opening party, presented by Rolex, was held here on Tuesday to celebrate the two brands new alliance. This forms a part of a series of such events being held in Brazil, China and India, just a few weeks before the Grand Slam begins.

These exclusive parties provide a platform for announcing new collaboration between these two brands and officially launching the 2019 Roland-Garros season.

Brazil got the ball rolling on May 8 at the French consul’s residence in São Paulo. Gustavo Kuerten, three-time winner of Roland-Garros and the Grand Slam’s ambassador since 2018, attended the event. The series then moved to China attended by Li Na, representing Rolex, as well as Jin Dong, who has been Roland-Garros’s ambassador in China for the last two years.

Speaking on the occasion, Amritraj said, “Roland-Garros has always been one of the pinnacle tournaments and their partnership with Rolex is a great marriage of brands, which exude the same DNA of excellence. I am happy to be a part of this event in India, celebrating their new association. I also look forward to some stellar performances as we launch the 2019 Roland-Garros season.”

Dubourg said, “We are happy to associate with Rolex as our official keeper. We have a shared passion and history with the sport of tennis and a panache for excellence. With this event, we celebrate our association and the kick-off of the Roland Garros 2019 season. We have had a great association with India and look forward to foster our partnership.”

Partnering Roland-Garros is a natural progression given Rolex’s long and enduring history of supporting the sport’s leading events and organisations. These tennis championships are among the four pillars of the game, the biggest stage for players to showcase their abilities.