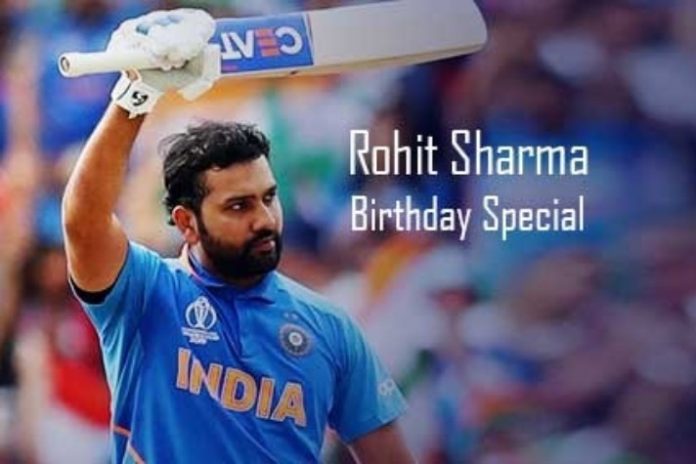 Team India top opening batsman Rohit Sharma turns 33 years today. Rohit Sharma has made a different and special identity in the Indian Cricket by his superb and remarkable games. On his birthday, Insidesport.co has brought to its readers some interesting and magnificent facts and records that are knocked out by Hitman’s willow.

2.Rohit Sharma began his career as an Off-Spinner.

4.Rohit Sharma is an ardent fan of Manchester United.

5.Rohit has hit the most number of sixes since the last cricket World cup 2019

6.Three double Tons in ODI history
Rohit Sharma is the only batsman who has scored three double centuries in the One-day Internationals history. Hitman’s first double century of his One-Day carrier was against Australia in Bangalore in the year  2009. After that, on 14th November 2014, Rohit write the history with his willow with his unbeaten 264 runs knock against the Sri-Lanka at the Eden Garden, Kolkata. Apart from this Rohit Sharma scored his third double (208) century in 2017 in Mohali, once again Sri-Lanka team.

7.Highest Individual Score in ODI History
Rohit Sharma has scored not one, not two but three double tons in ODI history. Rohit’s second double ton against the Sri Lankan team, at the Eden garden, Kolkata in 2014 is the biggest individual score of IDIs cricket (264).

8.IPL Second Richest Player
Rohit Sharma has one of the most lucrative journeys to the 13th season of the Indian Premier League. He is the second player to enter the IPL Moneyball 100cr salary club. According to the professional sports’ salary calculator Moneyball he had earned the total IPL Salary INR 122cr. Thus he stands 2nd in the list of Top 10 earners of IPL.

9.First Skipper to won Four IPL titles
Rohit Sharma is the first skipper to lead his team to the IPL title 4 times. Under the captaincy of Rohit Sharma, Mumbai Indians have won three titles (2013, 2015, 2017,2019) in IPL.

10.Most 150+ scorer batsman
Rohit Sharma the man with the most 150+ scores in One-Day Internationals too. He had scored 6 times 150+ runs in his ODIs carrier.