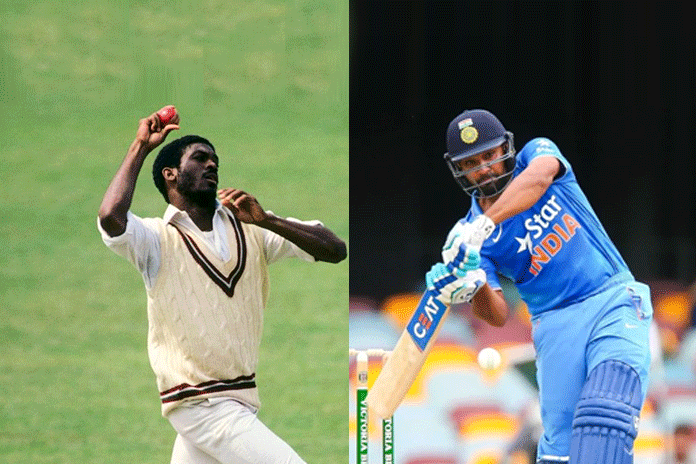 Star Indian batsman Rohit Sharma, West Indies cricket legends Michael Holding and Courtney Walsh are among more than 20 cricketers signed up to impart training to budding cricketers via an app.

The new smartphone-based mentoring app that gives budding amateur cricketers the chance to get direct access to their cricketing heroes for advice on how to improve their game was unveiled at Lord’s Cricket Ground in London recently.

Proatar, co-founded by Indian entrepreneur Srikanth Tanguturi and Sri Lankan investor Christy Kulasingam, is designed as a revolutionary new sports coaching-cum-mentoring platform to help passionate amateurs to get more out of their game through insights and inspiration from the elites of the game.

It has over 20 cricketing experts already signed up, including Indian cricketer Rohit Sharma and West Indian legends like Michael Holding and Courtney Walsh. “I am really excited about sharing some of my cricketing knowledge and journey to inspire young kids on their journey,” said Sharma, a prolific batsman in the Indian cricket team.

The new free-to-download app, initially available via an invitation-only referral code to control numbers, will have its global launch on September 15, when it will be available on Android and iOS via Google Play store and the Apple App Store respectively.

“We are delighted to take the covers off our platform at Lord’s. The very simple format allows amateurs anywhere in the world to have direct access to their heroes. The aim is for this to work complementary to a coach and we look forward to talents being discovered through Proatar over time,” Tanguturi said at an unveiling event at Lord’s.

The app allows keen cricketers to send in videos of their technique to one of around 30 cricketing greats on Proatar’s list, who then assess the techniques and respond with detailed suggestions to improve their game.

“Advice can sometimes come in one ear and out of the other, but when you draw on the amateur’s video and show the player whether they have their leg straight when they shouldn’t that advice is likely to stick,” explained Holding.

“Having taken a lot from the game, it is time to give something back to cricket,” added Sri Lankan cricketer Mahela Jayawardene.

The average price point of the app-based mentoring session is around $150 for a video consultation. Elites are priced at different levels, ranging from $100 to 400 per transaction.

“This sounds like a big number, and it is a premium product, but when we consider how much it would cost to have a single one-on-one session with an elite, assuming first you have access to them, and the value they can add, we believe this is a good investment in an amateur’s game,” said Kulasingam.

Each paid video consultation is returned within 14 days by the elite chosen by the amateur. A tailored feedback video with a mix of annotations, voiceover commentary, and picture-in-picture analysis by the elite is designed to help ambitious players improve their game.

Technical skills as well as non-technical query videos, for example on captaincy, nutrition, strength and conditioning, and the mental side of the game, can also be sent to a chosen elite.

The app has a charity and corporate social responsibility (CSR) element built into it, offering people and companies the chance to sponsor budding talent from the villages of India by buying sessions for them as a gift.

“The app philosophy takes the inspiration aspect seriously, adding gifting options for those who want to give a great moment and memory to passionate cricketers around them, and for corporations to provide consultations to deserving or under-privileged amateurs via gift certificate donations,” said Tanguturi, who has a budding cricketer in his young son.

Proatar, which combines the terms professional and avatar, has an initial squad of elite mentors representing a broad mix of the game current and former male and female players as well as coaches from around the world. Cricket is the starting point of the mentoring platform, which the co-founders say is easily translatable to other games such as tennis and golf over time.