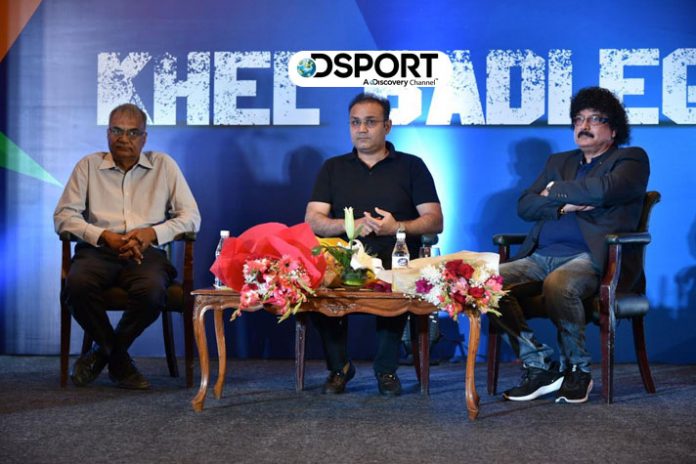 New Kabaddi Federation of India and DSPORT have announced dates for the first edition of the Indo International Premier Kabaddi League (IPKL), a brand new sporting league which for the first time ever in India, will also share a part of its revenue with players, besides their assured salaries and prize money.

As reported by IndisdeSport.co earlier, Virender Sehwag will be the face of the rival kabaddi league. Announced close on the heels of Star Sports-run Pro Kabaddi League player draft, the Indo-International Kabaddi League will take place in May-June.

At a glittering ceremony in the National Capital, the dashing former opening batsman said, “It pained the whole nation including myself to see India lose their golden stranglehold in the Kabaddi competition at the Jakarta Palembang 2018 Asian Games. Kabaddi is a pride of the country including many such indigenous sports which all of us at some point grew up playing. When the organizers of IPKL came to me, I felt their ideas and passion would certainly help us regain our place at the pedestal of Asian and world Kabaddi. I wish the IPKL and all players all the very best in this new journey.”

The IPKL will run from May 13-June 4, 2019, across three venues in Pune, Mysore and Bengaluru. There will be a total of 44matches in season one, which will feature eight teams and a total of 160 players, including 16 foreign signings. All players were selected post rigorous selection trials conducted throughout the country which were open to all.

The league will be broadcast on DSPORT (English) MTV & MTV HD+ (Hindi) DDSport ( Hindi) as well as several regional networks .

MTV, India’s No 1 Youth Entertainment brand and the Hindi broadcast partner of the league, is a dynamic and vibrant blend of music and pop culture. With a global reach of more than half-billion households, MTV is a cultural home to millennials catering to their interests and mind-sets. Over the years, MTV has moved beyond the realms of music and secured a niche in creating alternate passion points for youth including live sports such as MMA, ESports etc.

Also present on the occasion was Mr. Ravi Kiran, Director, IPKL, who said, “This is an effort towards creating a robust and transparent system for growing the sport of Kabaddi, which we all love so much around the country. This league is a revolutionary step towards increasing and strengthening the reach of this sport. For the first time ever players have been made stakeholders in the game through our revenue sharing formula”. This ensures the primacy of player’s interests”

On behalf of the official broadcaster DSPORT, Mr. R.C. Venkateish, MD & CEO, Lex Sportel, also shared his thoughts: “This is a truly momentous occasion for us in our endeavor towards bringing the best of live sporting action to audiences and fans. What really stands out with IPKL is NKF’s vision of giving the two most important stakeholders of a sport, the fan and the player, the importance they deserve. We strongly believe that IPKL will be a catalyst to unearth the best of Kabaddi talent in the country restoring its pride of place in this centuries old sport with homegrown origins.

Ferzad Palia, Head – Youth, Music and English Entertainment, Viacom18 said, “Being the number one youth and entertainment channel, MTV has been at the forefront of showcasing the most sought-after yet relevant content for the youth in India. Adding Kabaddi to the fold we’re expanding our offering in sports that includes Cricket, Football and Mixed Martial Arts, along with E-sports. Kabaddi is one of our country’s homegrown sports and IPKL will be a great platform that explores and encourages the talent pool in India. This partnership reaffirms our commitment to bolster opportunities that a league like IPKL will offer to the youth and help us build yet another successful sports franchise. We are certain that IPKL will introduce a legion of Kabaddi players to young fans that inspire them to play.”

The opening phase of the IPKL will feature 20 matches and will be played at Pune’s Balewadi stadium between May 13th -21st, while 17 games of the second phase will take place in Mysore’s Chamundai Vihar stadium from May 24th to May 29th.

The final phase in Bengaluru beginning June 1st will have 7 games, with the grand finale scheduled at the Kanteerava stadium on June 4th.

Each team will comprise of marquee players and will include five raiders, seven defenders and three all-rounders besides two foreign signings. One coach and physio will also be assigned to the teams.

All matches will be broadcast live on MTV & MTV HD in Hindi and DD Sports and several regional channels besides DSPORT ( English) between prime time 8pm-10pm.

Kabaddi has emerged as one of the most popular sport in India in terms of TV viewership as according to industry reports close to 621 million people watched the sport last year alone, up from 310 million back in 2015. It is therefore the second highest viewed sport in India today, after cricket.