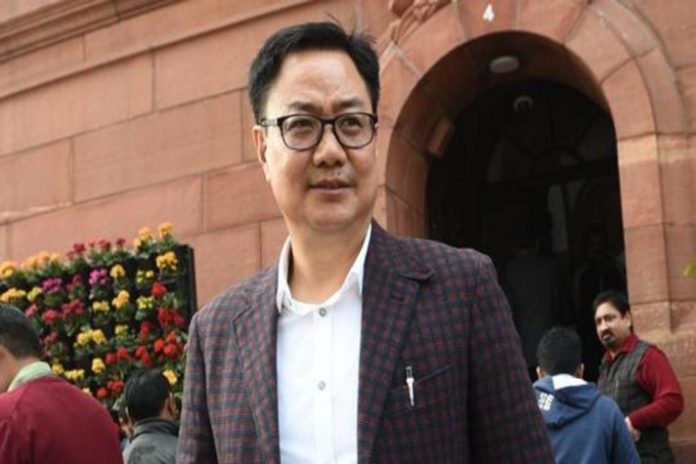 Sports Minister Rijiju today (Friday) said all pending complaints of sexual harassment at SAI institutes will be disposed of in the next four weeks to ensure a zero-tolerance approach towards the menace.

Reacting to a report which claimed that 45 cases of sexual harassment were reported from 24 Sports Authority of India (SAI) institutes over the last 10 years in which little or no action was taken, the minister asserted that the body’s institutes are, in general, safe spaces.

“There is zero tolerance for sexual harassment on SAI campuses. The inquiries that are underway will be speeded up. I have directed that all pending cases will be disposed within the next four weeks,” Rijiju said in a statement, which did not reveal exactly how many cases are pending as of now.

“We will ensure that the already existing system of addressing sexual harassment cases and protecting our athletes, both boys and girls, is made more robust.

“Athletes spend their formative years at SAI centres and it is our foremost responsibility to give them safe environment in which to live and train,” he added.

SAI has stated that it has a robust system in place to ensure that complaints of sexual harassment are dealt with strictly.

Meanwhile,The Sports Authority of India on Friday rejected criticism that sexual harassment complaints are not dealt with strictly at its institutes, asserting that a robust system is in place to tackle the menace but acknowledged that punishments should be harsher for those found guilty.

Stung by a report which claimed that 45 cases of sexual harassment were reported from 24 SAI institutes over the last 10 years, the nodal body to administer Olympic sports in the country asserted that the number of cases stands at 35 for the past decade in which action has already been taken in 14.

Also, it said that a “robust” system and substantive “deterrents” are in place to deal with such cases. However, speaking to PTI, a top official, on conditions of anonymity, conceded that punishments, which currently range from transfers to cuts in pay and pension to suspensions, ought to be more stringent.

“I agree the punishments need to be harsher but it’s a policy decision, which can only be changed at the Ministerial level,” he said.

SAI said as per its 2011 to 2019 records, 35 complaints of sexual harassment have been received out of which inquiry is in progress in 15 cases.

Three were found to be false allegations, while two accused were acquitted by the court. One accused committed suicide while another complaint was withdrawn.

“To ensure that there is no possibility of intimidation to the complainant, the officer/coach against whom the complaint is raised is shifted from the place of posting as soon as a complaint is received,” read an official statement from SAI.

“A call centre is also in operation (since April 2019) through which trainees can lodge their grievances directly,” it added.

The release stated that in December last year, more than 350 distress calls were received. The body did not specify how these complaints were dealt with but assured that “follow up” action was taken.

The Sports Ministry, under whose jurisdiction SAI functions, pointed to some data of its own to highlight that sexual harassment cases were more of an aberration than the norm.

“Every year around 15,000 athletes sign up to get training in different SAI facilities all over the country. Out of this 4,000 to 5,000 go on to compete in national and international competitions. It means around 1,50,000 athletes were trained at SAI facilities in the last 10 years,” an official said.

Sports Minister Kiren Rijiju said he has nonetheless directed the SAI to dispose off pending cases within the next four weeks.

“The inquiries that are underway will be speeded up. We will ensure that the already existing system of addressing sexual harassment cases and protecting our athletes, both boys and girls, is made more robust,” he asserted in a statement issued on Friday.

Along with its head office in Delhi, where the sexual harassment committee is headed by Regional Director Meena Bora, SAI has 12 regional committees to deal with complaints.

“What does it say? It only says that we have a robust system and deterrents in place.”

The official also said that false allegations is another aspect which cannot be ignored.

“There is a system in place. In case of a sexual harassment complaint, an impartial inquiry is conducted and if the accused is found guilty, action is taken against him or her,” he said.

“Sometimes false allegations also come up after inquiry,” he added.

As per the prevalent norms, the SAI constitutes an Internal Complaint Committee at every region with a senior lady as chairperson after receiving a sexual harassment complaint.

The panel also includes representatives of NGOs with “majority of committee members being ladies”.

Besides, the SAI also conducts workshops in local languages in every region for women trainees to sensitise them about sexual harassment and the recourse they can seek in case they are faced with it.

All sexual harassment cases involving minors are dealt under the provisions of Protection for Children from Sexual Offence (POSCO) Act.