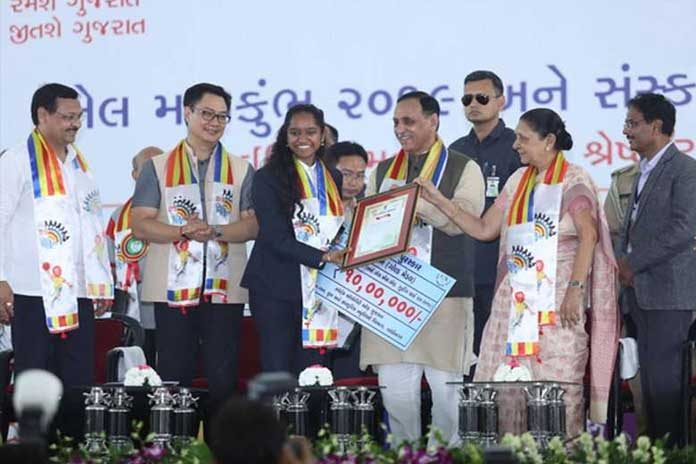 A conference of sports ministers of various States is likely to be held in November at Gujarat’s Kevadiya, the site of the Sardar Vallabhbhai Patel’s memorial, Union Sports Minister Kiren Rijiju has said.

He also said that New India will not be content with three-four Olympic, CWG medals.

Rijiju said Gujarat Chief Minister Vijay Rupani had agreed to his proposal and added that it would also allow participants to visit the world’s tallest statue and learn about the culture of the State.

The Union Sports Minister was in Ahmedabad to take part in the inaugural ceremony of Sanskar Dham Sports Academy, an outfit run by a trust, and attend the opening ceremony of the state government’s tenth edition of annual ‘Khel Mahakumbh’.

“I have proposed to hold all-India sports ministers’ conference in the month of November at Kevadiya, and the chief minister has agreed. Not only sports, but we will also get to know about Gujarat’s culture and a chance to see the world’s tallest statue,” he said.

Rijiju praised the State Government for taking steps to improve its sports infrastructure. Changes in the sports sector in the last five years had started to yield results and claimed the country was no longer satisfied with just a few medals in international events, he added.

“In the past, India would participate in Olympics, Asian Games, Commonwealth and world championships and would feel happy after winning 2-4 medals. But in New India, we are not going to settle for one or two medals,” he said.

Addressing the gathering, Rupani said government initiatives like ‘Shaktidoot Yojana’ have produced results with beneficiary players from the state winning 337 gold, 208 silver and 108 bronze medals at various levels. He said 47 lakh students will take part in the Khel Mahakumbh, with around 1.60 lakh students getting ₹40 crore worth of awards.