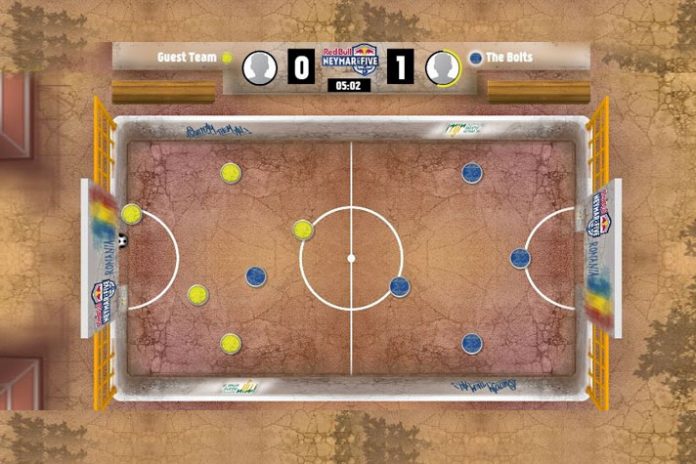 Red Bull has launched a new online game with Neymar Jr’s signature five-a-side football. Fans can test their football skills through an online version of the game, which also give lucky and skilled ones an opportunity to win a trip to Neymar’s Five Finals in Brazil.

The online game redbullneymarjrsfive.com/game follows the same format as the real-world tournament where each time a point is scored, the opposing team loses a player.

Players aim to score the maximum amount of goals before the time runs out, making virtual gameplay just as fast and fun as its physical counterpart. Players aged 16 and up have until June 1 to try and reach the top of the leaderboard, scoring the highest number of goals in the game to win an exclusive trip to the Neymar Jr’s Five World Final in Brazil.

The Red Bull Neymar Jr’s Five Online Game is a top down 2D virtual version of the popular five-a-side tournament. It is playable on any Internet-connected computer, gaming console, tablet, or mobile device with an AR (augmented reality) and PVP (player versus player) capabilities. Winners will be selected based on the highest scores attained within the game. One international winner will be selected, enabling fans from all over the world to compete.

The fans can register, compete, and seek more information on www.redbullneymarjrsfive.com/game. Entries close June 1 and winners will be announced June 2.

Red Bull Neymar Jr’s Five is the Brazilian star’s signature five-a-side tournament bringing players from around the world together to celebrate their shared passion: football. It is a fast, technical and fun competition, played in more than 40 countries around the world, including Neymar Jr’s home country Brazil, and France, where he plays with Paris Saint-Germain.

In 2019, more than 40 countries and six continents will host tournament qualifiers, where players compete to reach their national final and book a ticket to the World Final. The World Final will be celebrated for the fifth time at Instituto Projeto Neymar Jr. in Praia Grande, Brazil with the last team standing taking on Neymar Jr’s personal team for a shot at the worldwide title.