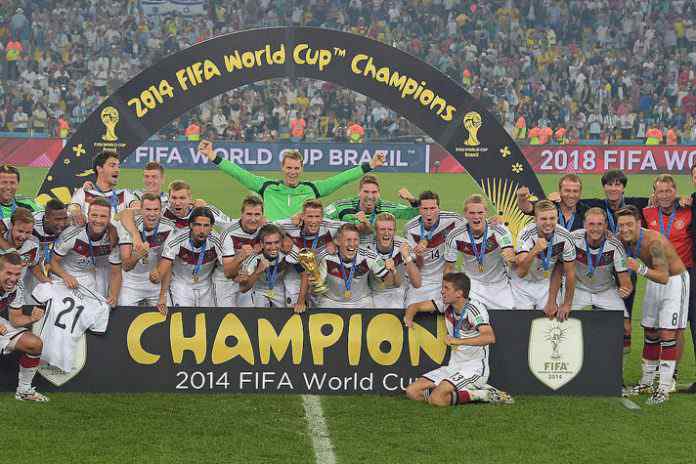 Germany stands a strong chance to take home the 2018 FIFA World Cup Crown. Why? Here are the reasons revealed in a report!

There is no dearth of reports that have sprung up and doing rounds ahead of the FIFA World Cup 2018 in Russia, predicting the probables and favourites to win the football’s most coveted title. A recent study by UBS, a Swiss MNC investment bank and financial services company, finds Germany to be the firm favourites for the FIFA World Cup crown this year.

UBS has used advanced statistical and econometrics tools – ones that are traditionally applied to assess investment opportunities and risks – to find out which team will lift the glittering trophy at Luzhniki Stadium on July 15 finals in Moscow.

Brazil with five titles and 2010 champions Spain are not far behind Germany with a likelihood of 19.8% and 16.1%. According to the grouping of the nations, Germany and Brazil are set for an easy start. Spain, however, will have to hit the ground running if they are to beat Portugal, the current European champions, in their opening game.

The study has revealed that the top three teams in the table are according to the so-called Elo rating. It is an objective measure of team strength that also looks at how well a team has played in the past. Unlike other ratings, victories versus stronger teams will improve the rating by more than wins versus weaker opponents. Similarly, more important matches count more than friendly games.

Another indicator used to explain the likelihood of success at the world cup is looking back to a successful qualification. Germany won each match, Spain didn’t lose, and Brazil lost only its first game against Chile back in October 2015. The reports, however, still believes in a ‘common disclaimer in football’ that aptly applies to the above statement: “Past performance is no guarantee of future results.”

Successful participation and past wins in the World Cup is also a factor taken into consideration in the study. Brazil is the only nation that has participated in every single tournament since the inaugural edition of the FIFA World Cup in 1930, and also holds the record as a five-time champion. Germany follows behind Brazil at the second spot with four titles and four campaigns in which they ended as runners-up.

Not everything is left plausible with regards to this year’s title winners. The report has urged to look out for England, France, Belgium, and Argentina for surprises. The simulations indicate these nations have a realistic chance of lifting the trophy. Argentina’s fate will strongly depend on the form of their star players, which is an element of uncertainty and hard to capture with the quantitative model used, states the report ‘Investing and Football – Special Edition – 2018 World Cup in Russia,’ by UBS.

Predicting the winners of the football World Cup still remains far from employing an exact science. It still remains nothing more than amusement and gratification of die-hard football fans around the globe.

Unlike this study, the CIES Football Observatory post, in its 225th issue, has revealed Spain to be in the best position to win the World Cup. The conclusions were based on an exclusive Power Index that combines the average percentage of the matches played at domestic league level since July 2017 by the 23 most fielded players per team in the World Cup qualifying campaign with the average sporting level of employer clubs.

The power index used by CIES had placed Spain tops the list ahead of Brazil. Germany, Brazil and Spain are still among the favourites for a majority of football fans around the world.