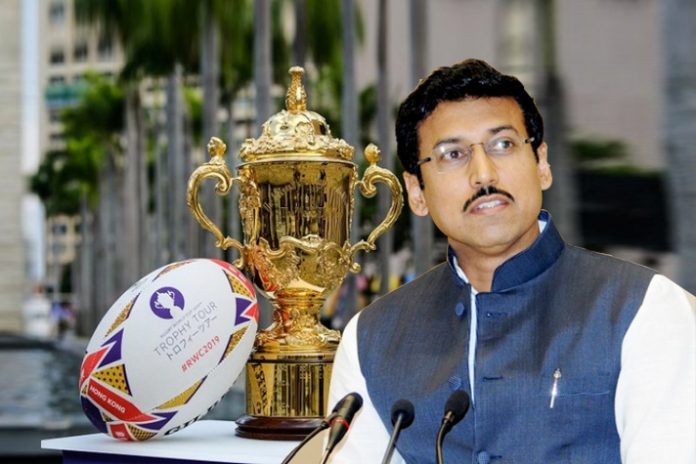 The prestigious trophy is bestowed upon the Rugby World Champion team.

The Rugby World Cup is scheduled in Japan next year. Even as India is yet to go a long way in the sport, recognizing the strength of Indian market the world body of the sport and the World Cup organizers are in India for a Cup tour – that will also see the Webb Ellis Cup visiting Mumbai and Bhubaneswar. India’s is the eighth stop for the Webb Ellis Cup on its 18-nation to promote the sport and inspire a new generation of rugby fans.

The Trophy Tour supports World Rugby’s Impact Beyond Programme which aims to use World Rugby tournaments as a catalyst for the growth of the game. Project Asia 1 Million, part of Impact Beyond, which aims to attract one million new rugby participants by 2020, has already reached over 500,000 people across Asia.

The Rugby World Cup Japan next year will be the first ever edition of the quadrennial tournament in Asia. Rugby World Cup is the third largest sports event in the world after the summer Olympics and the Football World Cup.

The Rugby World Cup next year will see the world’s best 20 teams in action between September 20 and November 2. The tournament has DHL, Emirates, Heineken, Land Rover, Master Card and Societe Generale on board as the worldwide partners.

Rugby history in India dates back to 1924 when the inaugural All India and South East Asia Rugby Championship was first played on Indian soil. The last two years has seen the biggest growth and development of rugby across the country with India ranked first in Asia and third in the world in terms of participation numbers through World Rugby’s Get Into Rugby programme by reaching over 160,000 participants in 2017. In addition, rugby is now a core sport in the SGFI’s National School Games Calendar for the U14, U17 & U19 Boys and Girls categories as well as part of AIU’s National University Games calendar – yet another major milestone for Rugby India and World Rugby’s ambitions to grow the game globally.