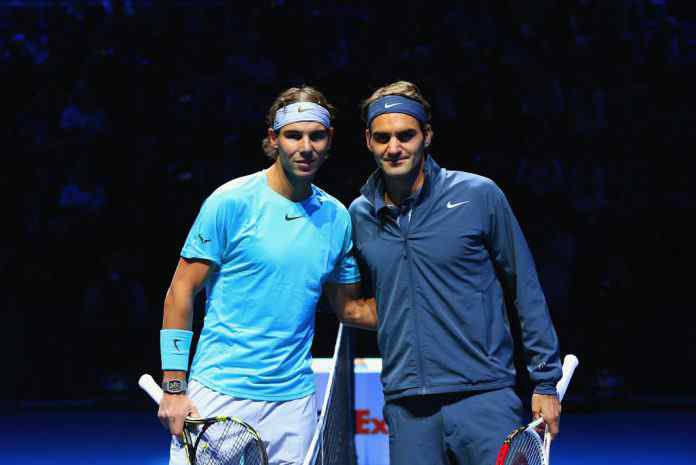 Rafael Nadal, the current World No. 1 showed the World his prowess by crushing South African Kevin Anderson 6-3, 6-3, 6-4 in a one-sided US Open final on Sunday to claim his 16th grand slam title, leaving himself just three shy of Swiss great Roger Federer’s record.

This was the second time since 2007 that the two legends have equally shared the four grand slams titles in a calendar year. Federer won the Australian Open and Wimbledon. Nadal went home with his 10th French Open crown this year before the triumph on Sunday at the season-ending US Open.

The victory for Nadal also meant a sizeable prize purse of $3.7 million, the most for any grand slam winner in the Open Era. With this cheque, the world No.1 clocked his career earnings to $89.98 million, still trailing his rivals by a huge margin. In the professional world of tennis rank doesn’t equal wealth.

However, on comparing the Master of Nadal with King of Grass Federer in the numbers, Nadal has won on nine of his 12 grand slam encounters with Federer.

Former World No 1 Mats Wilander finds Nadal hungrier than Roger Federer and says that he is likely to overhaul his Swiss rival’s Grand Slam title tally to become the most decorated player ever. But is he any closer to what Federer is? Let’s take a look. 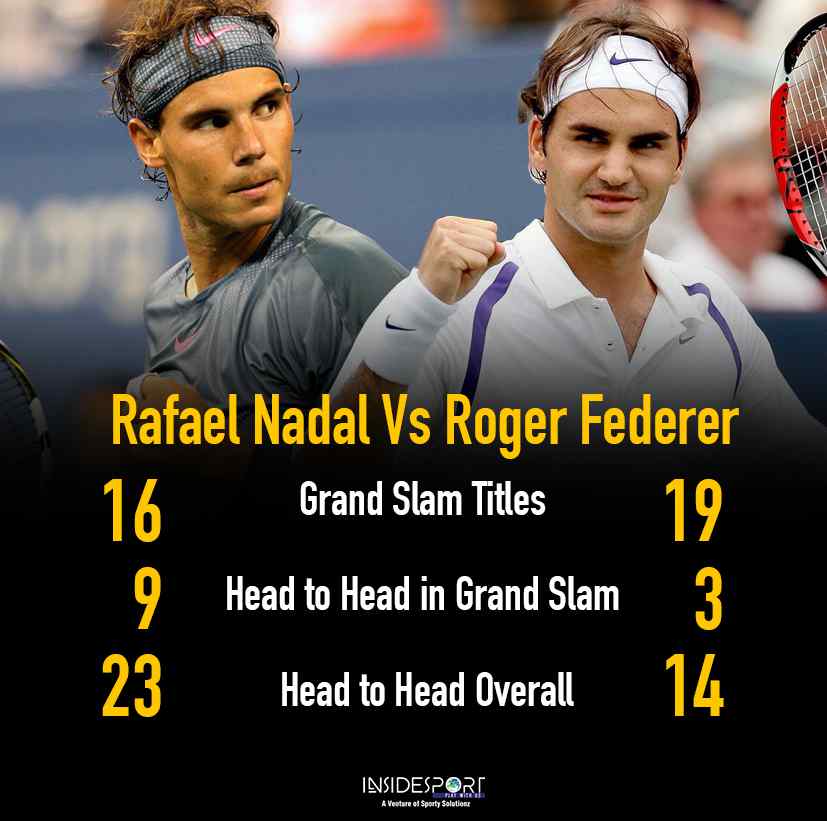 In terms of winnings, the Swiss International started in 1998 and within 2 decades of his career he has 19 majors to his name. While, the Spaniard started his career three years later in the year 2001 and is now just 3 majors short than Federer. His career record against Federer is 23-14, which shows that he is the only player to challenge the King at his game.

Nadal also stands atop the ATP rankings with 9465 points. Way ahead of Federer at 7505 points with others lurking behind. 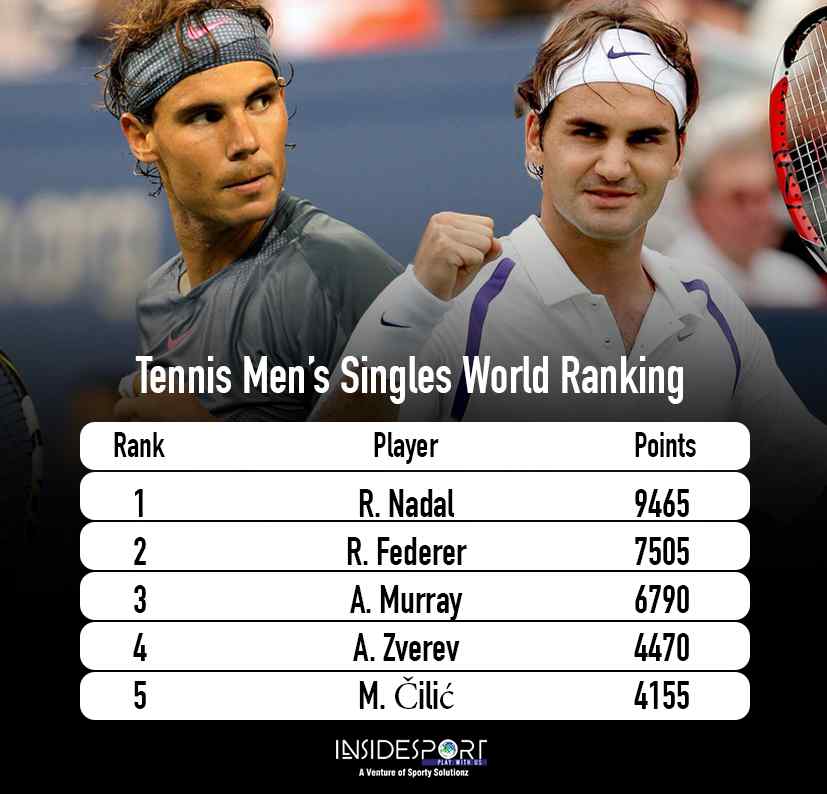 While these numbers tell us how great and competitive Nadal is, the numbers around earnings and wealth is a different story.

According to Forbes, Federer stood at the 4th spot in the highest paid athlete list, while Nadal was at the 33rd spot. The earnings spanned over a year period from June 2016 to June 2017. 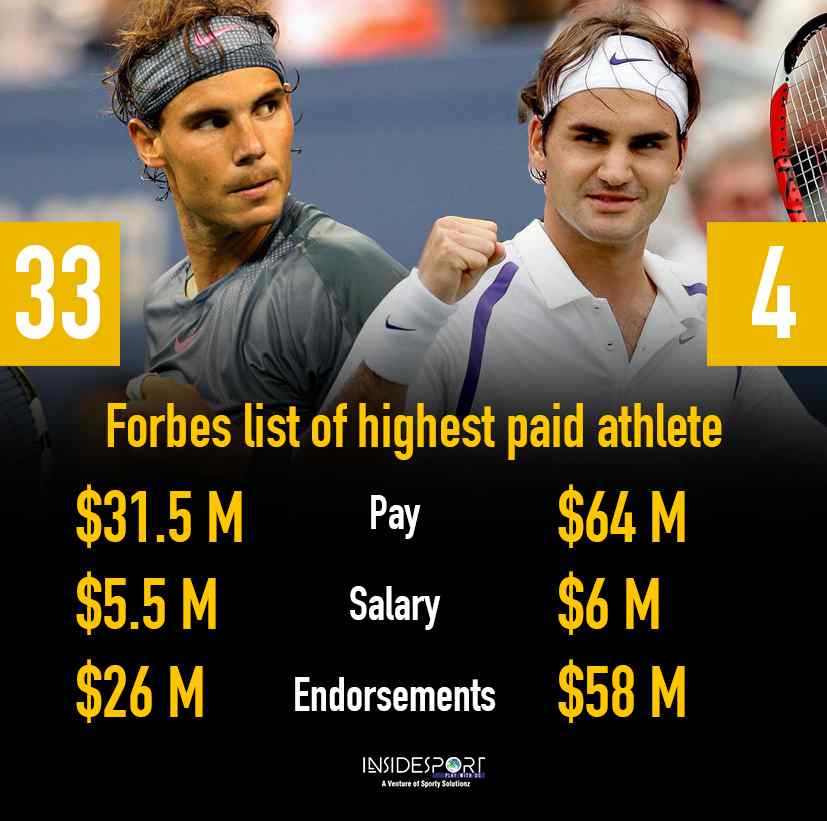 However, the huge difference between the two can be accounted to the fact that Federer is a wild appeal to brands. He is the brand king in the sporting world and the top most beneficiary through endorsements.

Federer’s endorsement portfolio is arguably the best among all celebrities. He already has 11 sponsors, including global brands like Nike, Mercedes-Benz, Rolex, Credit Suisse and Wilson. These deals are reportedly around $50 million annually.

On the other hand, endorsement partners for the Spaniard include Nike, Babolat, Kia Motors, Telefonica, Banco Sabadell, Richard Mille, Tommy Hilfiger and other local brands.

In terms of overall earnings, Nadal is halved by the number that Federer is counting till date. The career earnings of Federer are estimated to be around $600 million and is the only tennis player that belongs to the top 15 list of richest athletes. For Nadal the number is estimated to be around $300 million. And there is no way; Nadal is beating those numbers anytime soon.

However, based on what we’ve seen this year, both the Tennis legends are to be celebrated. Their continued dominance is a story to be remembered by the generations to come. How they’ve pushed through injury and defied age this year is remarkable. To sum it up, no factor can downplay what they have achieved.