Gayle is presumed to join the West Indies side when they lock horns with visitors Sri Lanka at the start of March. West Indies will announce a squad later this week but Gayle has already interrupted a stint with the Quetta Gladiators in the PSL to return to the Caribbean, having been given indications that he will feature in the three-match T20I series against Sri Lanka.

If Gayle successfully undergoes a fitness assessment, it will be exactly two years to the day since he last played a T20 international, against England in March 2019.

Gayle to return to PSL 2021 after WI vs SL series

Though the announcement of du Plessis as cover hinted at a return, the actual reasons for Gayle flying back were revealed, inadvertently, in a PCB press release after his 68 (off 40 balls) against Lahore Qalandars failed to prevent a nine-wicket defeat. Gayle has batted at one down for Quetta and scored 39 off 24 balls in the first game, another loss to Karachi Kings.

But this recall, under the captaincy of Kieron Pollard, marks a significant milestone in Gayle’s career, as well as for West Indies, coming as it does in a year in which they will be preparing to defend their T20 world title. That tournament is due to take place in India in October-November, West Indies having won the last edition of the tournament also in India, in 2016.

At 41, Gayle’s future – international and otherwise – has been the subject of on-off discussion since the 2019 World Cup. Prior to the event, he had said the World Cup would be his last ODI cricket, though he reversed the decision during the tournament itself. He then turned out for the ODIs against India after the tournament, blasted a 41-ball 72 before walking off – to handshakes from opponents and applause from fans – as if it was his last game for West Indies. 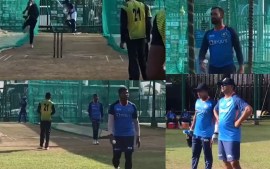