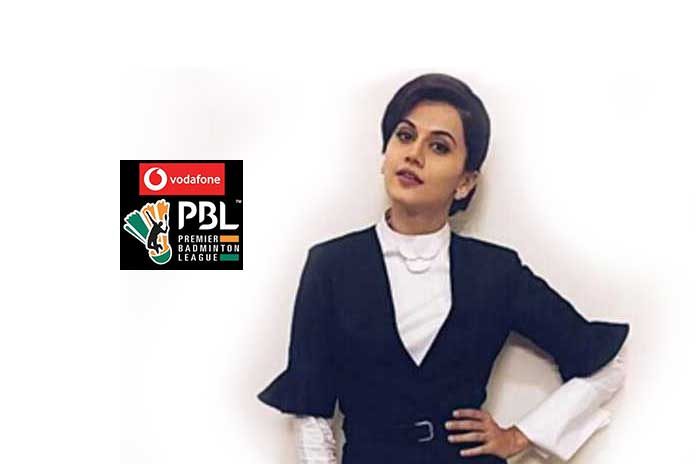 Pune Seven Aces will be the ninth addition to the Vodafone Premier Badminton League team roaster. The 4th edition of league to be held from December 22, 2018 – January 13, 2019

The team will be owned by Bollywood actress Dr. Taapsee Pannu and her management agency KRI.

Taapsee returns to the badminton league for her second stint. The Bollywood Diva has been the brand ambassador of Hyderabad Hotshots in the inaugural Indian Badminton League, organised by Sporty Solutionz Private Limited. Exhibiting her commitment to the sport, franchisee and the league, Taapsee had attended all the IBL 2013 games as PVP Ventures-owned Hyderabad Hotshots had emerged the winners in the Grand Finale at Mumbai.

In its endeavour to take the Vodafone Premier Badminton League (PBL) to unprecedented heights and making it a much bigger affair, the Badminton Association of India has introduced the new team for the fourth edition of league, having its highest prize money.

After the highly successful completion of three editions, the city of Pune will join the bandwagon to make the event a nine-team affair from the forthcoming season.

The Pune team has been baptized as Pune Seven Aces and is owned by popular Bollywood actress, Taapsee Pannu and KRI.

The new addition underlines BAI and its President, Dr. Himanta Biswa Sarma’s philosophy of taking badminton to all the corners of the country as well as making the League the most talked about and followed not only in India but also globally.

Echoing the thoughts, BAI President and Chairman PBL Dr. Himanta Biswa Sarma said, “The number of people getting inclined towards badminton in this country has witnessed a steep rise in the last few years. PBL especially has been instrumental for such a development. The League started off with six teams in Season 1 and now we have nine franchisees within a span of three years, which is an incredible feat. I am confident we will continue to increase the popularity of the sport and PBL will continue to make waves all across in the future too.”

The upcoming season will begin from December 22, 2018 to January 13, 2019 and will be played across five cities, Mumbai, Pune, Hyderabad, Ahmedabad and Bengaluru.

Critically acclaimed for her acting Taapsee Pannu, the Pune owner, said after signing her association with the League, “I have played quite a bit of badminton in my early days and have a special liking for the game. I always wanted to associate myself with the game in a big way and I have found the perfect avenue to express my passion through the League. I am confident that Pune Seven Aces will be a team to reckon with.”

Mumbai will host the opening ceremony of the fourth edition.

“We will see a mix of doubleheaders and single clashes this season as all the nine teams will vie for the crown. The new season will also witness some of our young shuttlers like reigning Junior World Champion Lakshya Sen making his foray into the Elite League. With the auction taking place on October 8, the PBL has opened up new vistas for promising players and will act as a springboard in the development of Indian badminton,” said Atul Pandey, Executive Director, SportzLive.

With Star Sports as Official Broadcaster, the League has seen over 40 million viewers hooked on to watching the action Live besides following the matches globally on Hotstar. The biggest boost for the organisers was getting the fans to the stadium and Season 3 saw a gate revenue over one crore.