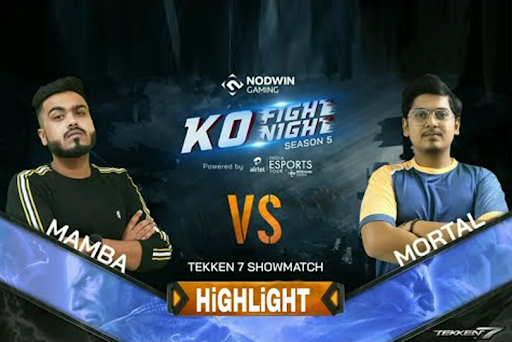 Nodwin gamings KO FIGHT NIGHT brought us the show Match between Mortla and Mamba, it was a first to 10 wins format.
Mortal admitted that this was his first fighting game experience, he was ready to have some fun anyway. Also Mortal was playing using a keyboard.ka
Mamba has previously played tenkken 7 and felt confident to beat mortal.

The game started off with MABA going for Yoshimitsu and Mortal trying and getting the hang of the game overall. Mamba continued to win till Mortal finally won the seventh game, which Mamba let mortal win.
At the end Mamba won 10-1 over mortal. Both overall had a lot of fun and mortal said “I’ll definitely play Tekken7 on my stream”, we are definitely looking forward to this stream!
Our next Show Match was between Scout and 8Bit Rebel.
Pre game Rebel admitted to having played the game quiet a lot and has the hang of the game, while Scout has never played the game before.

Scout was given a short crash course of the game by the hosts as well as rebel, we headed into the game.
The Show match was a total stop by Rebel, who gave Scout one game on purpose and went to win 10-1.
Post-game Rebel teased Scout, now that he is beaten he will learn the game in a few days, get better at the game then him and then invite him to play. All of them agreed to this, that scouts competitive attitude is what pushes him even in PUBG. The show match ended with Scout said he could play the game well enough in 1 weeks’ time.
Our final show match at KO FIGHT NIGHT was between REGALTOS vs THUG.
Both players agreed to be playing Tekken 7 for the first time, so unlike the previous matches we expected this to go pretty even. This game was a race to 7  which Thug won 7-2. Both players had a lot of fun playing and admitted that they would definitely play the game again. In fact THUG even might think about grinding for a bit and try to play the game professionally. With this our KO FIGHT NIGHTS show matches came to an end, an overall badass day to watch the most popular esports personalities of India played and enjoyed fighting games.

PUBG Mobile Community Event: A Trip to the Past YouTube Challenge where players can win iPhone 13 and other rewards

PUBG MOBILE x DUNE: Dune themed items are now available in-game which can be earned by taking part in the event

Call of Duty Warzone Season 6 Patch Note is live: Iron Trials ’84 in Private Matches, various Bug Fixes, and an adjustment to the...