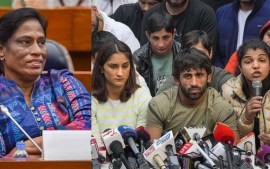 The Payyoli Express in October had tied up with crowd funding platform milaap.org to raise INR 27 lakh for the 16 budding athletes training at her school.

The crowd funding round at milaap.org has stopped formally. However, the school is still short of around INR 7 lakh to meet its fund requirement and is hoping to get more funds directly.

The PT Usha School, running on government grants and private donations, is training young girls and offering them free training, boarding, and lodging for the past 15 years. The school was set up in 2002.

“Celebrities like Mohandas Pai and Kumari Shibulal have sponsored five to six athletes each in the past. Sudha Murthy had once donated us INR 20 lakh. The mud track (at the school) was donated by the State government and the synthetic one by the Central government. Our hostels are built by Sobha Developers,” said Usha, the Golden Shoe award winner for the best athlete in the 1986 Seoul Asiad.

“Athletics is our focus, but our kids also pursue formal education at nearby schools and colleges. Some of them scored above 90%,” said a beaming Usha, who is currently training 16 athletes.

The Usha School trainee Abhita was declared the best girl athlete in the country in the senior girl’s category at the National Schools’ Athletics Championships in Pune earlier this year. She, according to Usha, has been training a minimum of seven hours per day with an aim to represent the country at the 2020 Tokyo Olympics.

Usha had to take to unconventional methods to raise funds and in spite of support from various agencies, corporate and individuals, funding has never been consistent.

Training for each of the 16 students at the academy takes INR Rs 3-6 lakh per year. The school has a capacity to train up to 40 promising athletes. However, entry, for now, is limited to the maximum but is able to train only 19 due to lack of funds.