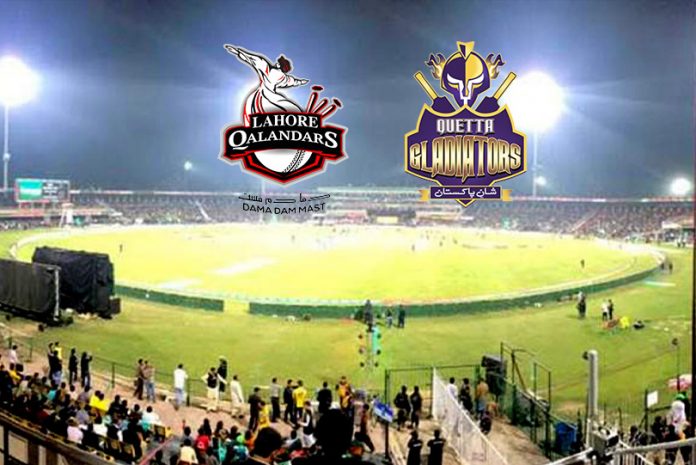 Quetta Gladiators will have a lot to gain and Lahore Qalandars are left with precious little to lose as the two teams meet in the second header of the Pakistan Super League 2020 today (Saturday) at Lahore’s Gadaffi Stadium.

Hosts Lahore Qalandars have lost four of their five games during the season and there remains little hope for them to regain lost ground, but fifth placed Gladiators are still well placed to finish among the top four and progress to the knock out stage.

Quetta Gladiators will by upbeat for the fact that tournaments second best performer with the bat Jason Roy and top-performing bowler Mohammad Hasnain are in their ranks. Roy has accumulated 227 runs from seven innings, while Hasnain has scalped 14 wickets. Bane Cutting has been impactful with the bat and the ball – taking eight wickets and striking 146 runs in five outings. Veteran Shane Watson (181 runs) has been another consistent performance.

Lahore Qalandars have been let down by their batsmen. Mohammad Hafeez is the top-scorer for Lahore Qalandars with 123 runs and a strike rate of close to 130. He has the best of 98*. Samit Patel and Ben Dunk, after their heroics in the last game, have also scored 121 each.

Inconsistency has been the bane of the Lahore bowlers. Dilbar Hussain, Shaheen Shah Afridi and Salman Irshad have all returned four-wickets hauls once apiece, but they have failed to repeat the performance and strike in tandem.

Quetta Gladiators have six points from seven outings, but win today will be good enough to catapult them to the second position in the league.

The scheduled to start at 7:30 pm will be broadcast LIVE and Exclusive in India on DSport. SportsTiger app will also stream the feed LIVE.