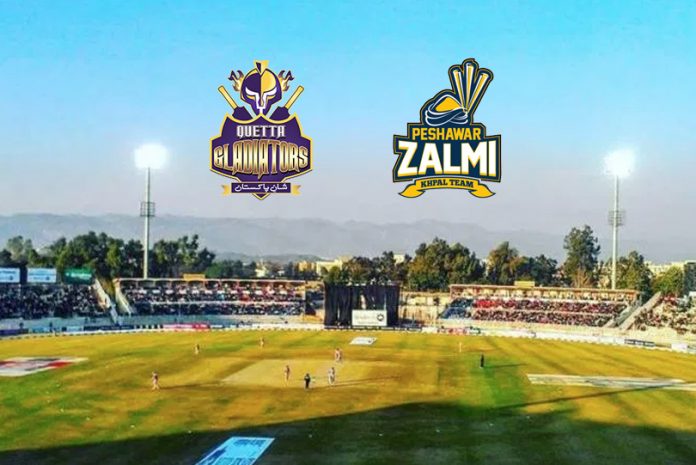 Quetta Gladiators face a tricky situation as they take on Peshawar Zalmi in the 18th match of the Pakistan Super League at Rawalpindi later today (Thursday).

A win for the fourth-placed Gladiators shall be good enough to catapult them to the second position behind league leaders Multan Sultans, but an adverse result will cost them the fourth place to rivals Peshawar Zalmi.

Quetta Gladiators have not just been able to establish themselves a shade about the Peshawar outfit, the battery of consistently performing stars also make them favorites in today’s game.

Peshawar Zalmi have lost three of their six games so far, won two and there was no result in one. Quetta Gladiators have won three and lost as many from their six outings to be a six points, one above the Zalmis.

Jason Roy is the top run-scorer for Quetta Gladiators with 182 runs from six games,  with  120. Shane Watson (162 runs) and Sarfaraz Ahmed (114 runs) have also contributed well with  the bat. Mohammad Hasnain is leading bowler with ten wickets – not just for his team but also in the league.

Kamran Akmal is leading the batting charts for Peshawar with 177 runs from 5 games. Haider Ali follows him with 114 runs at a strike rate of 158. Among the bowlers, Wahab Riaz has been good with the best of 2/21 while conceding runs at 8.91. Lewis Gregory has the best of 4/25.

An intriguing battle is on the cards at Rawalpindi today.

The match scheduled to start at 7:30 pm India time will be broadcast LIVE on DSport. Fans can also catch the LIVE streaming on the SportsTiger app.