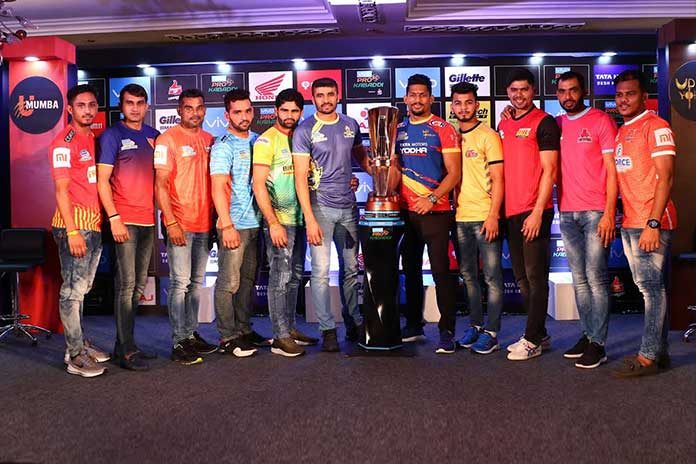 The Vivo Pro Kabaddi League Season 6 trophy was unveiled with much fanfare in Chennai today (Friday). The captains of all the 12 Vivo PKL teams were present to grace the occasion.

An all-new and grand Season 6 will start in Chennai on Sunday as the city hosts the first leg from October 7 to 11.

In many firsts for India’s most watched non-cricket league, Pro Kabaddi season six will have six crorepaties, six new captains and the first foreign coach for India’s indigenous sport.

If Haryana Steelers have created a Pro Kabaddi history with the league’s highest ever ₹ 1.51 crore bid to aquire Monu Goyat at the PKL player auction in May, U Mumba in yet another first have engaged Amir Gholamreza Mazandarani, the man behind Iran’s Asian Games gold, to shape the destiny of the team as the head coach. Mazandarani comes in as the first overseas coach in the league.

Pro Kabaddi will continue with its existing format over a duration of 13 weeks. The 12 participating teams are divided into two groups of six each. Each team will play 15 intra-group and seven inter-group matches. The top three teams of each group will play the Super play-offs qualifiers and eliminators.

The opening ceremony on 7th of October in Chennai will have Shruti Hassan and Vijay Sethupathi, the Face of VIVO PKL in Tamil Nadu

The opening match will witness defending champions Patna Pirates, take on home team Tamil Thalaivas in the first clash of the season

India’s most anticipated kabaddi league, VIVO Pro Kabaddi is back, with Season VI as the 12 fittest captains unveil the most coveted trophy.

Talking about the famous Dubki, Pardeep Narwal, Captain, Patna Pirates, said, “I will never stop doing the dubki. This season along with the dubki, I have worked on multiple strategic moves to counter our opponents. For Patna Pirates, one of the most challenging teams we believe is Puneri Paltan because their defense is very strong. I look forward to the season and I am going to take the trophy home this time.”

Talking about the team composition, Ajay Thakur, Captain, Tamil Thalaivas, said, “In the previous season our team composition was heavy on youngsters. So, if it happened that I was not on the mat, taking instant decisions was tough. This year, the team has a perfect balance of young and experienced players, we have Manjeet Chillar, Jasvir Singh and Sukesh Hegde who can take phenomenal decisions at the spur of the moment during the match.”

Commenting on the biggest rivals for Bengaluru Bulls this season, Captain Rohit Kumar, said, “According to me, the team that puts its best foot forward will win, it is a competition, and everyone will come prepared. In my opinion Tamil Thalaivas is the most prepared team for this season, under the able guidance from Ajay Thakur. In terms of players, Surrender Nada is the one defender who is the toughest to beat for a raider, along with being the best, he also covers up when his team falters.”

Talking about the impact of fitness in a 3-month long league, Rishank Devadiga, Captain, UP Yoddha, said, “Earlier the season was shorter, and the chances of injury were higher as players prove their mettle on the mat each day. With a 3-month long league, there is enough break period for players to rest and recuperate. The challenge in a longer league is the maintain a certain level of fitness consistently which is what we at UP Yoddha’s are training for.”

The inaugural ceremony of Season VI will be a star-studded affair, with eminent sports icons and film personalities expected to attend. Shruti Hassan and face of VIVO PKL in Tamil Nadu, Vijay Sethupathi will be seen cheering for their favourite teams along with fans on opening day.

Gearing up for the exhilarating matches across 13 weeks, the teams have been training fastidiously to prepare for a competitive season. With many firsts this season, the caravan will travel to Kochi for the play-offs and the grand finale will be held in Mumbai on the 5th of January, 2018.

In the fifth season, the league has expanded from 8 teams to 12 teams and amassed a viewership of 313 million. The final of fifth edition was the most viewed non-cricket sporting event on Indian television.

The league for the first time ever will have six players, who have breached the ₹ 1 crore mark in salaries – all sharing ₹ 9.3 crores among themselves.