Pro Kabaddi PKL 8: UP Yoddha win – UP Yoddha’s defence produced a night to remember as they pinned Bengaluru Bulls’ raiders…

Pro Kabaddi PKL 8: UP Yoddha win – UP Yoddha’s defence produced a night to remember as they pinned Bengaluru Bulls’ raiders and helped the team win 42-27 in the Pro Kabaddi League Season 8 at The Sheraton Grand, Whitefield, Bengaluru. Yoddha claimed six Super Tackles in the win that helped the team jump to 6th on the points table. Follow PKL 2022 Live Updates on InsideSport.IN.

Shrikant Jadhav scored a Super 10 (15 total points including 3 for tackles) while all the defenders chipped in with tackles. This was the best performance ever by a defence (22 tackle points) in vivo Pro Kabaddi League history and will certainly set the tone for the rest of the campaign.

The match had a poor start with both U.P. Yoddha and Bengaluru Bulls failing to impress. The star raiders Pawan Sehrawat and Pardeep Narwal spent most of their time on the sidelines as both players failed to make a difference. Even the usually reliable Surender Gill struggled to get the raid points for Yoddha who were staring at an ALL OUT near the 15th minute of the match. But they produced 3 Super Tackles, with substitute Gurdeep getting two of them, to completely change the balance of the match. 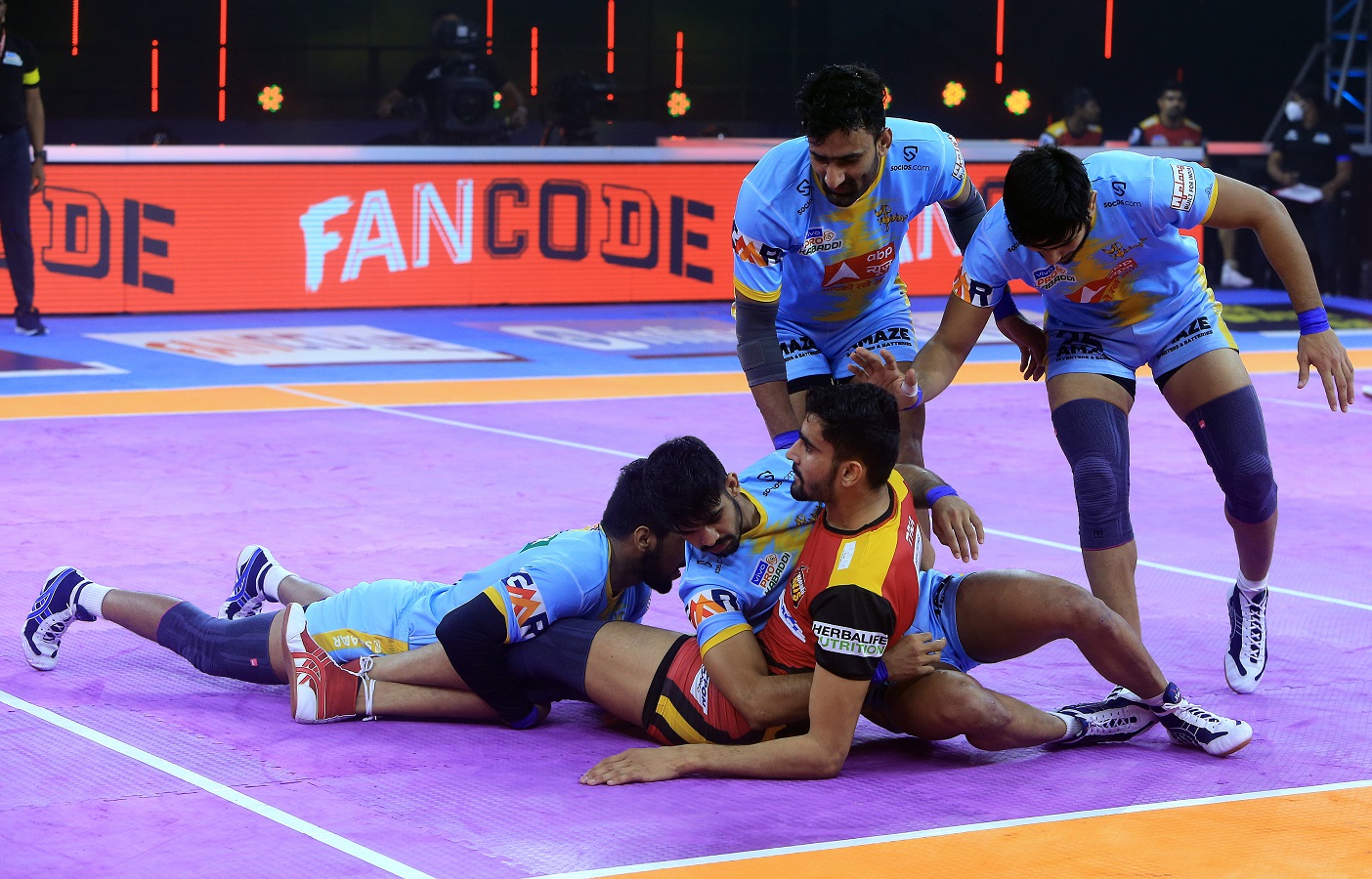 The much-famed Yoddha defence, who had tackled Dabang Delhi K.C.’s Naveen Kumar multiple times last night, was in their peak form once again. Substitute Mohammad Taghi added raid points for Yoddha in the last minute to mount the pressure on Bengaluru. The half ended 19-14 in favour of Yoddha with the Bulls having just one man on the mat.

Yoddha got their ALL OUT in the very first move of the second half. Shrikant Jadhav then got in on the act, his raid points cancelling out all the positive strides the Bulls were trying to make. Yoddha had an 9-point lead at the first Dhani Time Out with 10 minutes remaining in the match.

Bulls’ Bharat clinched an important Super Raid (3 points) after the restart as Bulls sensed a chance for an ALL OUT. But the mighty U.P. defence kept producing Super Tackles to stop the Bulls. Bharat and Shrikant Jadhav got their Super 10s in the final minutes, but it barely affected the match that belonged to the Yoddha defence. They secured the win and scripted history with the defensive masterclass.