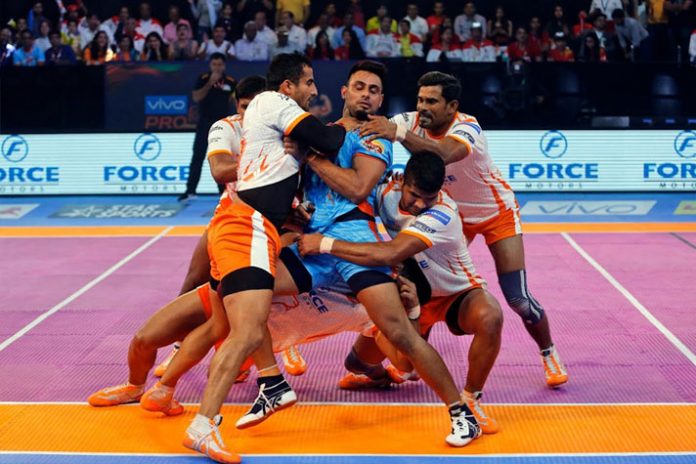 The journey of Kabaddi, from a non-descript rural sport, to one of India’s most admired profession sports league after cricket, is interesting and bewildering.

Competitions from other professional sports leagues in India, lack of well-known icons from the sport, and sacrosanct tag of kabaddi as a “rural pastime” were enough reasons to brew doubts over whether Pro Kabaddi league would be successful.

In a span of five years, going into the sixth season, Pro Kabaddi is established that “bachpan ka khel ab bachhon ka khel nahin hai” (the sport we played as kids is no more a kid’s game).

While various other sports properties in India were trying to emulate the successful business model and riches of the Indian Premier League (IPL), PKL has carved a niche for itself emerging as the leading sport in India well connected from the grassroots to the professional level.

Kabaddi in its formative season lost the charisma and icons even an Indian Super League had to start with a bang. But over the years, the league has emerged as the second most-watched professional sports league behind the IPL.

The pinnacle of Kabaddi in India, PKL was launched in 2014. Conceptualized by sports management company Mashal Sports, the league took off with eight franchisees who came forward to become a part of kabaddi’s rich legacy, paying a little over a crore (approx $250,000) to join the kabaddi’s professional journey.

The venture was an instant hit with the Star Sports’ value-added broadcast strength. The first season of Pro Kabaddi surprised everyone beyond all measures of expectations with the league garnering over 435 million television audience, the second only behind IPL 2014 which had raked in only 19% of that number in the debut season of the cash-rich T20 cricket league.

It became clear after the inaugural season that the sport is not only popular in rural India but also has the ability to attract significant eyeballs from the urban audiences. Star Sports, PKL’s rights holder since 2014 leveraged that hard-to-be-seen opportunity and acquired a 74% stake in the league’s parent company.

According to the data and stats by Broadcast Audience Research Council (BARC) India, PKL was pegged to be the popular non-cricket property with season 4 contributing to 61 per cent of the total viewership share among the leagues other than IPL.

PKL Season 5, being the most successful season ever, garnered 1.6 billion impressions form the live telecast on seven channels of Star Sports cluster. The finals of the season 5 clocked in 25.4 million impressions compared to 18.9 million in season 4, marking a 34 per cent growth.

The year 2017 became the most auspicious for the Pro Kabaddi after the Chinese smartphone brand Vivo signed a ₹300 crores ($45 million), five-year deal to acquire the title rights of the league. The same period also saw the league expanding to twelve teams. With the addition of Haryana Steelers, Tamil Thalaivas, UP Yoddha and Gujarat Fortune Giants.

By season 5, PKL bolstered its position as the biggest sports league in India in terms of the number of teams and the second largest sports spectacle behind cricket for the largest audience base and the title sponsorship value.

In contrast with the inaugural season when PKL barely had any sponsors or commercial partners, some of the top-notch blue chip brands and corporate giants have come forward to pledged their support for the league even amid the current scenario when the around 55-60% of the ₹7,000 crore Indian sponsorship market is monopolized by cricket.

Tata Motors is the latest brand to join the sponsor roster of PKL ahead of PKL Season 6 in the associate sponsor category. Cola brand Thums Up, Honda and RR Kabel are among the other sponsors of Pro kabaddi.

Goyat became the most expensive player in Pro Kabaddi after he was bought by Haryana Steelers for ₹1.51 crores in the PKL season 6 player draft. The total salary payouts for season six was ₹45.93 crores, 247 per cent of what was paid out in season 4 and testimony to the league’s tremendous growth and magnitude.

PKL is the only professional sports league in India to have deeply rooted grassroots programs on the national scale. The organisers introduced KBD Juniors, a kabaddi tournament for children, in the last season which saw massive participation from schools in cities across India.

KBD Juniors season 2 will be hosted across the 12 PKL Season 6 host cities. The tournament will have 24 schools per city, and 3,500 students between the age group of 11 to 12 years will battle it out to make it to the grand finale.

Kabaddi, thanks to these grassroots program by PKL, now beats football in popularity among Indian kids which contributed to 20 per cent of the total tv viewership, marking the highest share across all age groups.

A new season, with the commercial bard already raised at the player auction in May this year, is all set to further propel kabaddi to bigger commercial glory.