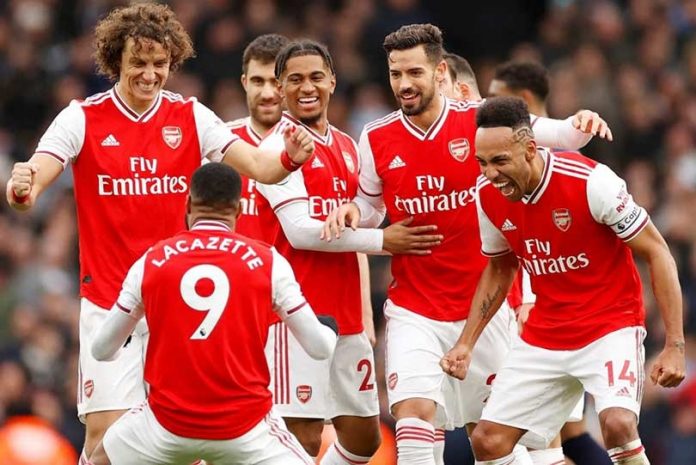 Premier League: Arsenal defeat Leed United in their 24th game of the season at the Emirates Stadium. Pierre Emerick-Aubamayeng scored a hat-trick to win the game for the Gunners. This marks their 10th win of the season.

Aubamayeng had a lot of space to run into after cutting inside from the left. He cleverly wrongfooted Ayling to open up space for his shot.

He composes himself smartly and keeps the ball low, hitting it in the near bottom corner in the 13th minute as Meslier is unable to get down to keep it out.

Bukayo Saka was pulled back but he shrugged off Alioski to get into the box. Cooper came across to help and put in a clumsy challenge to bring Saka down. The referee pointed to the spot for an Arsenal penalty.

But, the referee, Stuart Atwell is asked to go over to the monitor to have a look at the incident from the VAR TV. Saka was already going down when Cooper went across and the call was overturned.

Although, just a few minutes later, Meslier took too long to clear the ball and Saka quickly closed him down. He tried to win it back through the back of the forward and kicks his heel, bringing him down in the box.

This time Arsenal is given the penalty. It is Aubamayeng who steps up with the captain’s armband. He sends the goalkeeper the wrong way to coolly firing his shot in the left of the net to double Arsenal’s lead and secure his brace.

The 3rd goal came right before halftime. It looked like Arsenal overplayed it as they passed it around the edge of the box, but they managed to open up space. Ceballos picked up his fellow Spanish full-back at a tight angle.

Bellerin then smashed it past Meisler at the near post. This gives Arsenal a 3 goals cushion at halftime.

Arsenal picked up where they left off in the first half. It did not take long for the hosts to make it a 4-goals lead.

Smith Rowe swung a cross and Aubameyang just pulled away from Strujik at head the ball in the far post in the 47th minute.

Leeds get 2 goals back

Strujik made a run into the edge of the area as Saka lost track of him. Strujik beats David Luiz to the ball and sent his harder past Bernd Leno to cut the deficit.

They still trailed by 3 goals up until the 69th minute. Leeds got in behind Arsenal with a couple of passes and Roberts pulled it back for Helda Costa

Costa fired the shot past Leno as Leeds trailed by 2 goals. They failed to convert any other chances and the game ended 4-2 in favor of Arsenal.