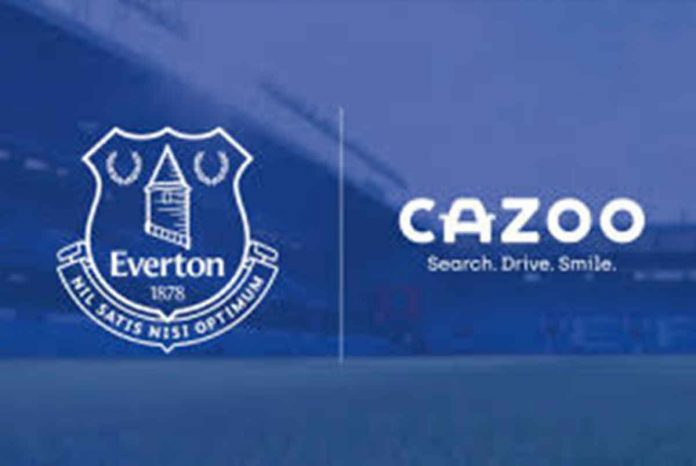 English Premier League club Everton have agreed a three–year deal with e-commerce business Cazoo (online car retailer) worth almost £29m. The name of the online car retail business will replace that of Sportpesa.

Cazoo was launched late last year and was founded by British entrepreneur Alex Chesterman. He is the man behind both Zoopla and LoveFilm. Their branding will now appear on the front of the Everton first-team and under-23s’ kits plus training gear.

The club will be paid £9.6m per annum in the deal. That is the same as it was getting from Sportpesa but the two companies decided to end a five-year contract that was signed in 2017.

Everton’s commercial team saw similarities between Cazoo – a ‘disruptor’ looking to change the way cars are bought and sold – and its own position in the Premier League as a club with the ambition of breaking the stronghold of Liverpool, Manchester City, Chelsea, Arsenal, Tottenham and Manchester United on the Premier League top six.

Sasha Ryazantsev, chief finance and commercial officer at Everton, said, “In our search for a new partner, we were hoping to find a dynamic brand with strong growth potential and we have certainly found that with Cazoo. Our partnership will help Cazoo extend its reach and audience significantly to continue its impressive growth trajectory.”

Also significant for the club in advancing its commercial growth strategy is the opportunity a the deal grants it to sell children’s replica kits with its front-of-shirt sponsor on. Since 2004, its main sponsor has been Malaysian beer Chang and then gambling firm SportPesa, sectors which can only be displayed on replica shirts for adults.

Alex Chesterman, the founder and chief executive of Cazoo, said: “This opportunity will help significantly enhance our brand awareness as we look to make Cazoo a household name.”

Where to Watch Premier League in India : Premier league will be broadcasted Live on Star Sports Select Channels and streamed Live on Disney+ Hotstar