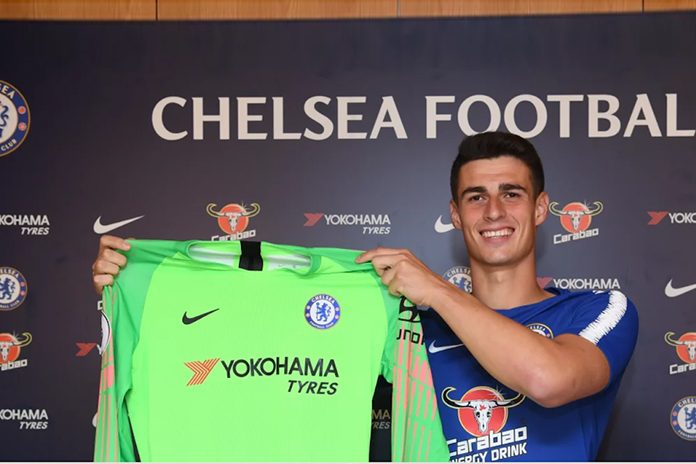 Spanish Kepa Arrizabalaga has become the most expensive goalkeeper in the history of football with a record $91 million deal with Premier League club Chelsea.

Chelsea have announced the signing of Spanish goalkeeper Kepa Arrizabalaga from Athletic Bilbao in seven-year record deal worth $91 million (€80 mn/ £71.6 mn) – making him the world’s most expensive goalkeeper.

The deal breaches the recently created record for a goalkeeper signing as Brazilian Alisson Becker’s had moved from AS Roma to Liverpool in a deal worth $85 million. The English transfer window, which is set to shut down today (Thursday) in few hours, has seen the club showering big monies to safeguard their nets.

Kepa’s signing has allowed the wantaway goalkeeper Thibaut Courtois to leave Chelsea, with the Belgian eager to move to Real Madrid. In a 90-minute spell, Chelsea agreed to sell Courtois to LaLiga giants in a deal reportedly worth $40.6 million (€35 mn).

Also Read: 5 key signings to watch out for in Premier League 2018-19 season

The news comes that Athletic Bilbao have announced on their website that Arrizabalaga had paid his required release clause consideration only weeks after the record was set by Allison’s transfer to Liverpool.

Kepa, who played over 100 career league games, has made more than 50 appearances in La Liga. He was also named in 23-man Spanish squad for the recently concluded FIFA World Cup 2018 in Russia. He becomes the sixth Spaniard in the Blues squad joining his compatriots Cesar Azpilicueta, Marcos Alonso, Cesc Fabregas, Pedro and Alvaro Morata.

“It’s a very important decision for me, for my career, and also for my personal life,” said Kepa. “So many things attracted me to the club, all the titles the club has won, the other players, the city, the English Premier League. It’s an accumulation of things, and I am very glad Chelsea has decided to trust me and to take me in as well.”

Chelsea Director Marina Granovskaia added, “Kepa is a talent we have admired for a long time and we are extremely excited about his arrival. He has already demonstrated fantastic quality and consistency and will be a big part of any success Chelsea have in the coming years. His long-term contract reflects the belief we have in him and we look ahead to the coming seasons with an enormous sense of optimism.”

Kepa has begun training with his new squad ahead of Saturday’s Premier League opener against Huddersfield.