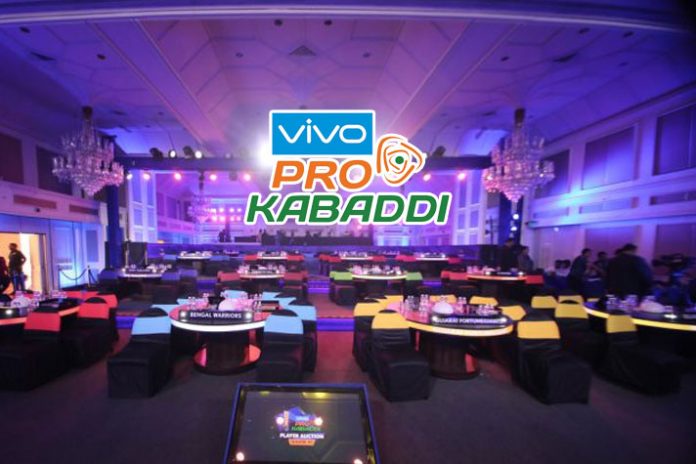 The twelve Vivo Pro Kabaddi franchisees have committed over ₹ 50 crore to acquire 200 players – 173 domestic and 27 foreigners – during the two-day auction process, which concluded in Mumbai today (Tuesday).

Season VII Player auctions of the VIVO Pro Kabaddi ended on a high note with franchises building a strong squad with a balanced set of raiders, defenders and all-rounders.

Siddharth Desai sold for ₹1.45 crore and Nitin Tomar sold for ₹1.20 crore yesterday (Monday) ended up to be the only two crorepati buys of the season. Domestic Category B also saw some big buys, including Manjeet being bought by Puneri Paltans for ₹65 Lakhs, and K Prapanjan joining the Bengal Warriors for ₹55.5 Lakhs.

At the end, a total of over ₹50 crore was spent on 200 players, a huge jump from the season 6 auctions. Among the foreign players, Mohammad Esmaeil Nabibakhsh was the highest paid player for his successful bid of ₹77.75 lakhs.

The player auctions was a strategic and well-thought construction of teams by franchisees for a competitive league experience. Final Bid Match was utilised by most teams to showcase their interest in building team continuity.

Commenting at the closure of the three-day auctions, Anupam Goswami, CEO Mashal Sports and League Commissioner VIVO Pro Kabaddi said, “The end of the VIVO Pro Kabaddi Season VII player auction marks yet another remarkable moment for Kabaddi as a sport. The squads look competitive for the upcoming season which will pave the way for an exciting season. The bidding strategies displayed by each Franchise stand testament to the evolution of the sport and the league. The teams look well-balanced and are a mix of young and experienced players. I look forward to VIVO Pro Kabaddi Season VII being an exciting event for all our fans, sponsors and teams.”

Commenting on the Player Auctions, Representative from the Title Sponsor ‘VIVO India’ Mr. Nipun Marya, Director-Brand Strategy, said: “VIVO Pro Kabaddi League is getting bigger with each passing season, and we are proud to be the sponsor of the biggest Kabaddi League in the world since 2017. During the last two seasons, we have seen a great response for our products during PKL and we would like to thank the fans for all their support. Considering the gaining popularity of Kabaddi among the youth, we are glad to promote the sport in the country. VIVO as a brand has always believed in promoting sports in India and our best wishes are with the all the young players making their debut this season.”

Reacting to the auctions, raider from Telegu Titans said; Siddharth Desai: “I jumped with joy when I saw the result of my bid. I come from a humble background; my father is a farmer and I know how difficult it is to become a Kabaddi player. I would like to thank Telugu Titans for believing in me and handing me the opportunity to showcase my talent. Now that I have been sold for such a high price I will make sure I give my 100% and make the team proud.”

Reacting to the auctions, raider from Puneri Paltans said, Nitin Tomar, “Puneri Paltans is home to me, and I am extremely happy that the franchise used the FBM card to retain me in the team. I will take this opportunity to raise my performance level and win for my team. I will give my 100% and maintain my fitness level to make sure that Season VII for Puneri Paltans is a successful one”

Anup Kumar, coach for Puneri Paltans: “I am extremely happy to be a part of the Puneri Paltans squad, team CEO Mr. Kailash Khandpal is very supportive who understands sports and respects a sportsman. We have a team in place and will focus on our performance for the upcoming league. Being a coach is a big responsibility, being a player and then becoming a coach is comparatively an easier transition. I am looking forward this role”

Rakesh Kumar, coach for Haryana Steelers: “I am happy with the current players who are no part of Haryana Steelers. I look forward to making my team play as a unit in the court and give them all the support and inspiration to perform their level best. The most important thing in Kabaddi is defense and cover position depends on defense. If the team’s cover position is strong, then corners are automatically set, hence the better the defense, better the raiders will also score.”

Gholamreza, coach for Telugu Titans: “We are very happy with our squad, happy to have a mix of both raiders and defenders – Kabaddi is a team sport, we will make sure every member of the team will perform their best. We are looking forward to the upcoming season.”

The PKL Season 2018 had witnessed the emergence of six crorepaties whereas Monu Goyat had breached the ₹ 1.5 crore contract mark. The 2019 bid had failed to match these two financial landmarks.