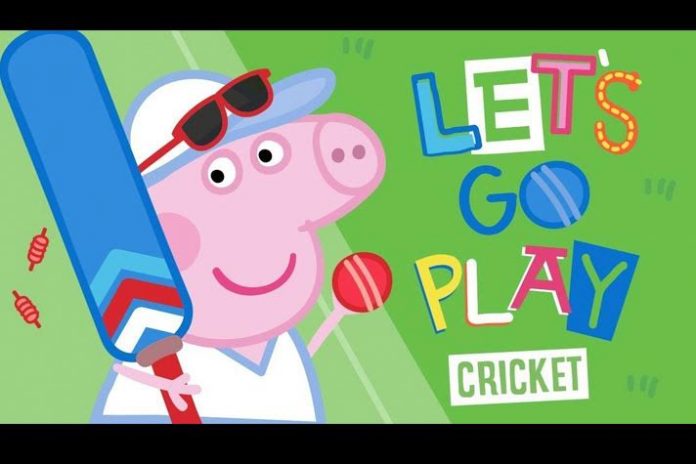 The promotion aims to get children interested in the sport to unlock the potential of young cricketers across the country. Celebrations were kick-started with retail promotions at Hamleys toy stores across Mumbai, Delhi, Chennai, Hyderabad, Bengaluru, Kolkata, and Pune, which featured Peppa Pig in cricket-themed artwork displayed throughout the store on POS. It also saw an exclusive gift with purchase offer giving 12 lucky kids the chance to appear in a cricket-themed video shoot with Peppa and George, and social media promotions attracting shoppers into the stores. Exclusive Peppa Pig merchandise, including toys and activity sets, is now available at Hamleys Stores across these cities.

To amplify the promotion, broadcast partner Nick Jr is creating a special cricket-themed video featuring Soha Ali Khan, granddaughter of Iftikhar Ali Khan Pataudi and daughter of Mansoor Ali Khan Pataudi, former Captains of the Indian Cricket Team, who appears alongside Peppa and George to offer kids some fun tips and advice on sportsmanship and teamwork.

eOne is also building on its global charity partnership with Save the Children and invited children from team India North, who represented India at the inaugural Street Child Cricket World Cup 2019– the first Cricket World Cup for street-connected children which took place at Lord’s London, to be a part of the campaign.

“Peppa Pig has been receiving a phenomenal response from children in India. With the ongoing World Cup, when the entire country is on an uproar, our aim is to engage with children through the sport and celebrate touch points such as teamwork, friendship, sportsmanship, and trust – bringing out the brand values of Peppa Pig as well. We are excited to see how Peppa connects with families through cricket. With promising collaborations with various stakeholders including the UK Government, Save the Children, Penguin Random House, Viacom18 Consumer Products, and various key influencers, we very much look forward to creating unforgettable memories for families in the region,” said EOne SVP international marketing, family & brands Sarah Dempsey.

“Peppa Pig’s widespread popularity, especially amongst the kids has made it a household name in India. Over the years, we have built on its powerful fandom, ranging from a wide range of consumer products, to curating special content for Voot Kids that has made it one of the strongest characters of the Nickelodeon ecosystem. Riding on the cricket fever, we aim to bring Peppa Pig in India through these esteemed associations that will further strengthen its presence across platforms, catering to a wide variety of audience. We are looking forward to witness this unique combination of Peppa Pig and cricket and take the level of entertainment a notch higher,” Viacom 18 business head – consumer products Sachin Puntambekar adds.

Speaking about the partnership, Save the Children head of campaigns Pragya Vats said, “This is a one of its kind partnership, a creative effort to promote the essence of sports among children while spotlighting issues faced by those who live on the margins. During the course of Street Child Cricket World Cup, we identified great interest and potential for the game among children to not just play but to voice their concerns. Together, through the association, we would like to promote the spirit of the game and ensure that every last child gets the right start.”

Additionally, the UK government is endorsing this campaign through ‘Creativity is Great’, where through their social media will promote #LetsGoPlayCricket.

The campaign will culminate with a grand finale event at Oberoi Mall in Mumbai on the 7 July 2019 where kids and their families will get a chance to indulge in some fun in Peppa Pig themed activities including a meet and greet with Peppa and George, and a storytelling session on the book Peppa Plays Cricket by Penguin Random House.

This finale event will be graced by Indian Cricketer and Captain of Indian Women’s Cricket Team, Mithali Raj along with Team India North, where they will be seen interacting with Peppa, George and all the kids present.