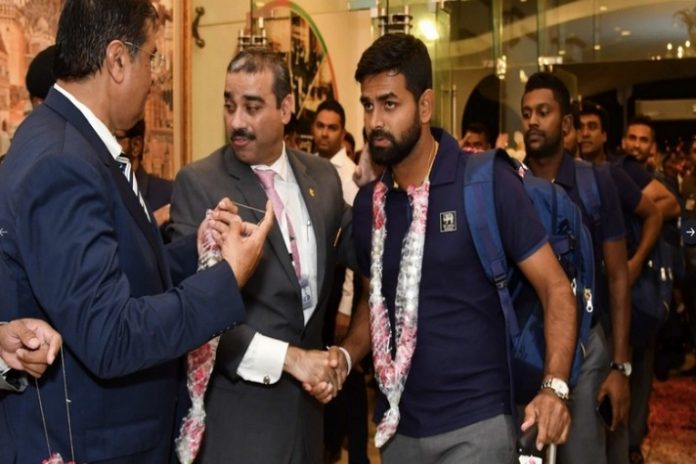 The Sri Lankans have arrived at Lahore, the city where their team bus was attacked by terrorists on the way to the Gadhafi Stadium ten years ago. The second leg of the two-week tour will feature three T20 Internationals in Lahore.

The first match is scheduled for tomorrow, Saturday.

The Island nation thereafter though had played one-off T20I at Lahore in 2017.

Must Read:Watch the great grand dad of 10 kids preparing for the world meet

After the conclusion of the ODI series in Karachi, which Pakistan won 2-0, it’s Lahore’s turn to host Sri Lanka for a three-match T20I series, which begins on Saturday, 5 October.

Pakistan last hosted a Twenty20 International series at Lahore’s Gaddafi Stadium in September 2017. In a three-match affair against a Faf du Plessis-led World XI, the hosts won 2-1, and later played one T20I against Sri Lanka in October.

The hosts for T20Is have roped in Babar Azam, Fakhar Zaman and Haris Sohail, and left-arm pacers Usman Shinwari and Mohammad Amir, who have all played crucial roles in making Pakistan the No.1 side on the MRF Tyres ICC T20I Rankings. They will be joined by the experienced duo of Umar Akmal and Ahmed Shehzad, who earned recalls to the 16-member squad following strong performances in this year’s Pakistan Super League. All-rounder Faheem Ashraf, who impressed in that tournament with 21 scalps, has also been recalled.

Sri Lanka, who will be led by Dasun Shanaka, have a similar-looking squad to the one that played the ODIs. They have the batsmen in their line-up who could put the runs on the board, but they need to contribute collectively. Sri Lanka’s bowlers weren’t that incisive in the ODIs, and that is one area they will need to work on, going into the T20I leg.

Pakistan and Sri Lanka last locked horns in a bilateral T20I series in 2017, when they played the first two games of the three-match series in Abu Dhabi, before moving base to Lahore for the final clash. Pakistan swept that series 3-0. The island national last won a T20I game in a bilateral contest against Pakistan back in 2012; they have won only two out of the 11 games between the sides.

In the recently concluded ODI series, Sri Lanka had their moments, fighting hard in the two ODIs (one was washed out), but Pakistan took the series 2-0.

The forecast looks promising for a full contest. Sri Lanka lost the only match they have played at the venue batting second, while Pakistan have lost just one out of the six T20Is they have played in Lahore.

Fans can catch the action LIVE on Sony Six and Sony Six HD. Fans on the move can also catch the LIVE steaming on Jio TV and Airtel TV. The match as per Indian time will start at 6:30 pm (7:00 pm local time) on Saturday.

Also Read: PAK vs SL 2nd ODI LIVE: When and where to watch live streaming, squads,…