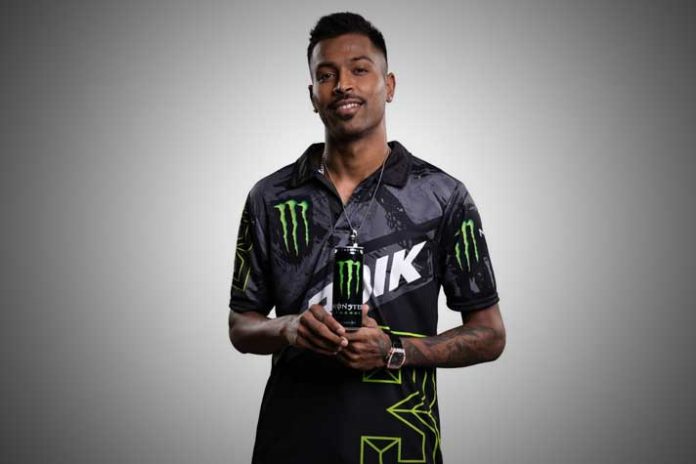 Hardik Pandya has struck a big one on brand endorsement pitch even as fitness issues kept him away from active cricket. The Indian all-rounder has landed a global endorsement deal with global energy drink brand Monster Energy.

The US Monster Beverage Corporation brand has tied-up Hardik Pandya as its first cricketer to endorse Monster Energy globally. Pandya is also the first Indian athlete to be associated with the brand.

Also Read: India Tour of New Zealand : Hardik to be back for white ball leg,…

Hardik will be the new face of the brand in India. He is not only known for his aggression on the cricket field, but also for his unabashed confidence and irreverent attitude off the field. With this association, Monster Energy aims to further inspire the youth of India to become fierce, powerful and self-confident.

“I’m delighted to be a part of the Monster Energy family. I have always believed in living my passion and following my dream, which is what motivates me to approach every day with the same zeal, energy and fearlessness,” said Pandya.

“I’m glad that Monster Energy also stands for the same philosophy through their collaboration with other sportspersons, which I admire. I look forward to this exciting and cool association,” added Pandya, who is managed exclusively by IMG-Reliance.

John Ludeke, Senior Director of Marketing, Asia said, “Hardik’s supercharged personality and athleticism embody the Monster Energy ethos. With his fearless attitude and aggressive style, he is pushing the boundaries of world cricket which makes him a great fit for the Monster Energy brand.”

US Monster Beverage Corporation, the brand owner which previously was known as Hansen Natural Company, has had an association with some of the world’s most accomplished sports personalities to inspire the rising passion for action sports and motorsports across disciplines. These include Ultimate Fighting Championship Superstar, Conor McGregor, MotoGP Legend, Valentino Rossi, 6x Formula One World Champion, Lewis Hamilton, and 6x X-Games gold medallist Jackson Strong, the recent feature in a major video campaign with Monster Energy in India. The brand has also on-boarded a classic mix of sporting heroes pushing boundaries and testing limits in their chosen disciplines.