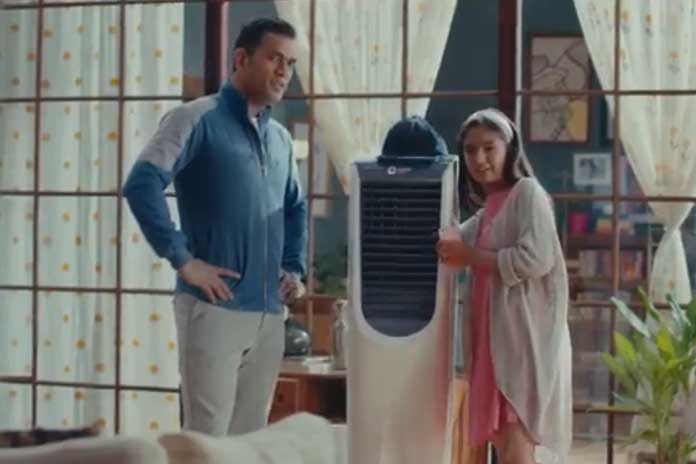 Mahendra Singh Dhoni’s lost journey with Orients Electic has reached PSPO fans to high-tech IoT-enabled air coolers. The technology and the product might have changes, but Dhoni and his onscreen niece Chikki remain common to Orient campaigns.

The TV ad starts with Anushka Sen, who plays the role of Dhoni’s on-screen niece Chikki, enjoying the powerful air throw of Orient air cooler. The next frame shows Dhoni’s entry and Sen comparing features of the air cooler with Dhoni’s batting prowess. This is followed by Dhoni getting a call from his wife to which Chikki mischievously points out how Orient’s new air cooler can also be controlled via mobile just like him.

Saurabh Baishakhia, Senior VP and Business Head, Home Appliances, Orient Electric Limited said, “We are continuously focusing on using technology led innovation to create the differentiation that the new age consumers expect. By introducing a complete line-up of IoT-enabled air coolers which can be controlled via Orient Smart mobile app and voice assistants (Alexa & Google Assistant), we have clearly created a differentiator in the segment. The new TV commercial brings out the characteristic features of our air cooler range by means of a witty dialogue between MS Dhoni and Chikki. I am sure that this TV spot will capture the audience attention and create a lot of excitement about Orient’s IoT-enabled air coolers.”

Sagar Mahabaleshwarkar, CCO, Contract said, “It’s not just talking about a new range of coolers but also the fact that it comes from the house of Orient. Which is why it was imperative to use the larger narrative that has been used for Orient Electric time and again, that of MS Dhoni and his on-screen niece ‘Chikki’.  And subsequently humanise all the innovative features of the coolers within it.”

The new TV ad will be flanked by print and digital.

Also Read: Dhoni let off with 50 per cent fine after angry reaction to umpire’s call