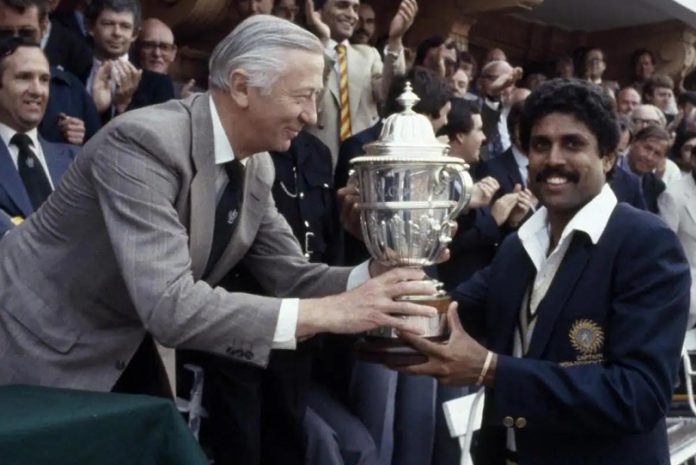 On June 25, 1983, India lifted their first-ever Men’s Cricket World Cup title when Kapil Dev-led side stunned defending champions West Indies by 43 runs in the final of the showpiece event at the Lord’s.983 World Cup final,1983 World Cup winning team is the most iconic bunch of cricketers from India.

The International Cricket Council (ICC) took to its official Twitter handle and informed its followers of India’s feat while also sharing a picture of Kapil Dev lifting the trophy at World Cup 1983.

“#OnThisDay in 1983, India won their maiden Men’s @cricketworldcup title.Kapil Dev and his side stunned defending champions West Indies, beating them by 43 runs in a memorable final at Lord’s,” the world’s cricket governing body wrote.

West Indies won the toss and opted to field first against India during the summit showdown of the prestigious event.

Subsequently, Krishnamachari Srikkanth (38) and Mohinder Amarnath (26) tried to steady India’s innings by sharing a half-century stand.
Following their departure, all other Indian batsmen failed to contribute much to their side’s innings and fell cheaply.

Sandeep Patil (29-ball 27) was the only other Indian batsman who have managed to add some scores on the scoreboard.

India were eventually bundled out for 183 runs inside 54.4 overs.

For West Indies, Sir Andy Roberts was pick of the bowlers with figures of three for 32, while Malcolm Marshall, Larry Gomes and Michael Holding all bagged two wickets each.

Joel Garner also chipped in with a wicket.

In reply, Mohinder Amarnath finished with brilliant figures of three for 12, followed by Madan Lal’s three for 31.

While Balwinder Sandhu also bagged two wickets, Kapil Dev and Roger Binny chipped in with a wicket each to help India bundle out West Indies cheaply for 140 runs inside 52 overs to emerge victorious.

Sir Viv Richards and Jeff Dujon were the top scorers for the Caribbean side with 33 and 25 runs, respectively.

Mohinder Amarnath was declared ‘Man of the Match’ for his match-winning performance with the ball.

It was India’s maiden title at the tournament before they ended their 28-year-long wait for another World Cup victory in 2011 when Mahendra Singh Dhoni-led India defeated Sri Lanka by six wickets at the Wankhede Stadium in Mumbai.