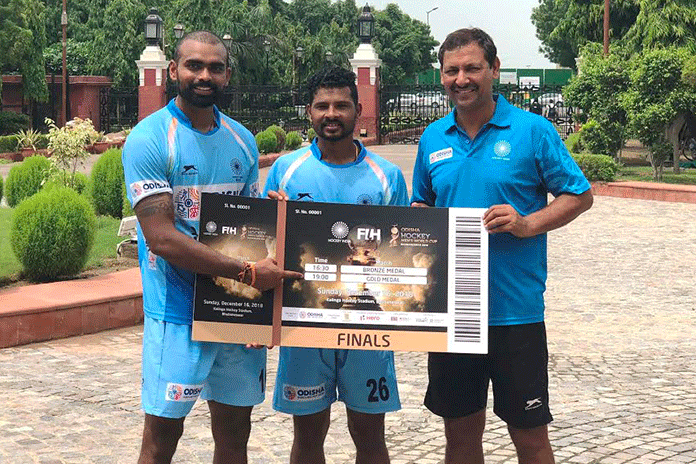 With just 75 days to go for Odisha Hockey Men’s World Cup 2018 Bhubaneswar to commence at the iconic Kalinga Hockey Stadium, the organizers have launched the online sale of tickets for the Semi-Finals and Final matches of the biggest tournament in Men’s Hockey. The announcement was made by the International Hockey Federation (FIH) and Hockey India on Friday as the city of Bhubaneswar gears up to host the fourteenth edition of the most prestigious hockey competition which is scheduled to take place from 28th November – 16th December 2018.

Earlier in May 2018, the sale of online general tickets for the Pool matches of Odisha Hockey Men’s World Cup Bhubaneswar 2018 was launched for which the pricing stood at ₹ 200 (East Stand), ₹100 (North Stand) and  ₹ 100 (South Stand). But with just 75 days left, the organizers have greeted hockey enthusiasts from around the world with good news by launching the sale of online tickets for the Knockout Stages of the competition which include the Semi-Finals and Final match as well as the 3rd/4th classification match.

The Semi-Finals and Finals’ tickets for the event are priced reasonably at  ₹ 250 (East Stand), ₹ 150 (North Stand) and  ₹ 150 (South Stand). All tickets for the Odisha Hockey Men’s World Cup Bhubaneswar 2018 are now available online at http://in.ticketgenie.in/buytickets/hockey-world-cup-2018

The sixteen participating teams are divided into four Pools of four teams each. The Pool stages will see each team play a total of three matches each over the span of twelve days (November 28 to December 9) before four Cross-over matches take place on December 10 and 11. The Knockout matches will take place between December 21 and 16 with the Quarter-Finals taking place on 12 and 13, followed by Semi-Finals on 15, and the 3rd/4th classification as well as the Final match taking place on December 16.

Odisha Hockey Men’s World Cup Bhubaneswar 2018 will consist of a total of 36 matches spanning over 19 days, the first of which will see World No. 3 Belgium take on World No. 11 Canada on 28th November 2018  in-front of a 15000-seater Kalinga Hockey Stadium. Host Nation and World No. 5 India will also be in action on the same day as they open their campaign against World No. 15 South Africa.

Rajinder Singh, President, Hockey India, expressed his joy at the launch of the online ticket sales for the Knockout stages of the Odisha Hockey Men’s World Cup Bhubaneswar 2018, “With the hockey fervour rising throughout the country ahead of the Odisha Hockey Men’s World Cup Bhubaneswar 2018, we decided to launch the online sale of tickets for the Knockout stages of the competition as it would give the fans a chance to secure their seats to witness the best teams in action at the Kalinga Hockey Stadium. The sale of tickets 75 days prior to the start of the competition will further give the fans, friends and families of players sufficient time-frame to plan their trip to the ‘cradle of hockey’ and have a match-day experience to remember for years. It has also been a conscious effort to make these tickets available at very affordable prices so that all the fans of the sport can witness the greatest players in action come November-December 2018.”