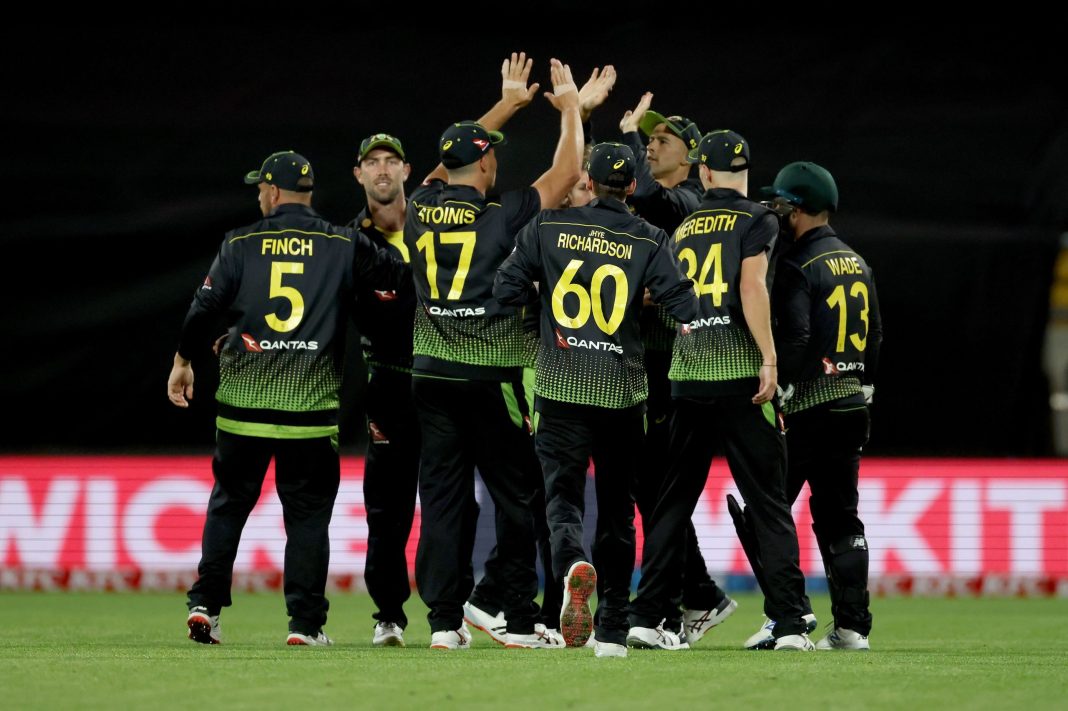 NZ vs AUS 3rd T20: Agar claims fifer, Maxwell shines with the bat as Australia beat New Zealand by 65 runs: Skipper Aaron Finch and Glenn Maxwell smashed half centuries before Ashton Agar spun a web over the Kiwi batsmen to steer Australia to a 64-run win over New Zealand in the third T20I on Wednesday.

New Zealand was 109/3 at one stage, but Agar wreaked havoc and picked six wickets to bundle out the hosts for 144. Agar turned the game in Australia’s favour with three wickets in the 13th over. New Zealand now lead the five-match series 2-1. For James Neesham it was an unforgettable night as he not only went wicketless, but also leaked runs at an economy rate of 15. The all-rounder was also dismissed for a golden duck despite coming in the game on the back of a stellar performance in the second T20I.

Chasing a mammoth 209, New Zealand got off to a bad start as they lost opener Tim Seifert in the second over. Debutant Riley Meredith conceded a six and a four in his first over, but took a wicket off the last ball.

Martin Guptill continued from where he left the other night but Meredith again stole the show when he dismissed skipper Kane Williamson in his second over.

However, New Zealand seemed well on track as the hosts ended the powerplay with 59 runs on board. In the ninth over, Adam Zampa got the wicket of the dangerous Guptill.
Devon Conway and Glenn Phillips then played risk-free cricket to ensure the hosts didn’t suffer any more hiccups during the chase. Just when their partnership started flourishing, Agar put Australia in control by dismissing both batsmen in the same over.

The left-arm spinner then dismissed Neesham for a golden duck to end New Zealand’s hopes of winning the game. Agar kept accounting for wickets to record best figures as New Zealand folded for 144.

Earlier, Australia had posted 208/4 from their 20 overs courtesy half-centuries from Finch and Maxwell, and a quickfire 43 from Josh Philippe

If Maxwell smashed 28 runs off a Neesham over, it was a welcome return to form for skipper Finch as had faced the wrath of former cricketers in the last few weeks.

Mitchell Santner has been ruled out of the XI due to illness.

Aaron Finch: I probably would have bowled first as well. There might be a touch of moisture on it, seems hard underneath but happy to bat first and put up a total. We weren’t at our best in those two games but we improved from game one to game two, that’s all you can ask from a side. We are confident that we can pull it back and take it 3-2. Riley Meredith makes his debut and comes in for Daniel Sams.

New Zealand spinner Mitchell Santner has been ruled out of Wednesday’s clash after “waking up this morning with a head-cold”.

“He is self-isolating as a precautionary measure while awaiting the results of a COVID test,” New Zealand Cricket said in a statement. “Wellington-based Adam Milne will join the team for today’s match at Sky Stadium as squad cover,” it added.

Santner returned with the figures of 4-31 in the second T20I that New Zealand won by four runs.

Hosts are currently leading the five-match series 2-0 after outclassing Aussies in the first two games. On Monday, NZC had announced that the final T20I between New Zealand and Australia will be shifted to Wellington from Bay Oval.

The 3rd game of the T20 Series between two of the world’s best T20 teams is will be played at 11:30 AM IST. The battle between Kane Williamson (NZ) vs Aaron Finch (Aus) side will be streamed Live in India on FanCode. In New Zealand Spark Sports will be streaming the match LIVE and in Australia on Fox Cricket and Kayo SportsAll matches will be broadcast live in Australia on Fox Cricket and also live-streamed on Kayo Sports.

IPL 2022 Qualifier 1: Gujarat Titans assured to play Qualifier 1 in Kolkata on 24th May, check who can be their OPPONENT for place...

Formula 1: Mercedes TO BANK on YOUNGSTERS if Lewis Hamilton is banned for Monaco Grand Prix – Check Out

F1 Spanish GP: MILESTONE ALERT! Lewis Hamilton a STEP AWAY from surpassing Michael Schumacher at Barcelona, as Ferrari leads with most Constructors’ wins? –...