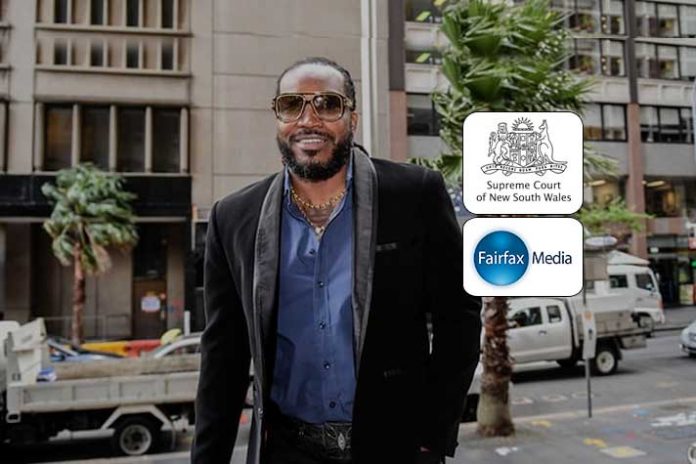 Fairfax Media has been ordered to pay Chris Gayle Australian $300,000 (₹1.55 crore) for publishing a defamatory article against the West Indian cricket star.

The New South Wales Supreme Court has awarded Gayle $300,000 (₹1.55 crore) in damages for being defamed in a Fairfax Media report that claimed that the cricket icon had exposed himself to a female massage therapist at a training session in Sydney during the 2015 ICC World Cup. The Age, The Sydney Morning Herald and The Canberra Times had reported the claims in 28 articles.

“The defamation went to the heart of Mr Gayle’s professional life as a respected batsman,” Justice Lucy McCallum has stated in her order today (Monday). A four-person jury in October 2017 had observed that Fairfax Media did not establish a defence of truth to the three allegations at the centre of the case, namely that he intentionally exposed his genitals, indecently exposed himself and indecently propositioned Ms Russell.

Gayle had initiated defamation proceedings against Fairfax Media in 2016 over the series of articles published in early 2016 after he was criticised for inviting reporter Mel McLaughlin to have a drink after a Big Bash game and telling her “Don’t blush baby” during a live TV interview.

The judge in her order also mentioned that “a particular source of hurt for Mr Gayle was the fact that there were calls for him to be banned from international cricket”.

She cited his testimony when he said the call for a ban for something he had not done was the most “hurtful thing I’ve ever actually come across in my entire life”.

“The articles attributed him with intentionally acting indecently towards her (the message therapist),” she said. “I accept that the imputations had particular resonance in cricketing circles, among fans, coaches, officials and players.

“Having regard to his high profile and popularity as an international cricketer, the nature of the allegation and the fascination of humankind with all things salacious, particularly in relation to people of some celebrity, I accept that it probably did..”

Fairfax previously said it would appeal the verdict and now says it also will challenge the award. “The jury was misled in a way that prejudiced Fairfax, and Fairfax did not get a fair trial,” the company said in a statement. “The damages award merely confirms the appalling burden of defamation laws in this country.”

The jury also knocked out the publisher’s defence of qualified privilege, which requires a media outlet to show defamatory articles were of public interest and it acted reasonably in publishing them.