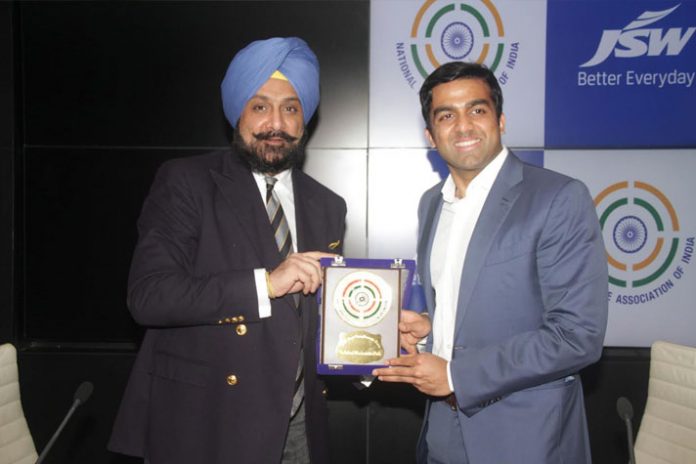 The National Rifle Association of India (NRAI), the apex body of for the Olympic sport of Shooting in India and the $ 13 billion Indian conglomerate JSW Group have announced the signing of an exclusive partnership to identify, train and develop shooting talent in the country for Tokyo 2020 and Paris 2024 Summer Olympics Games.

As part of the Agreement, JSW Group will fund NRAI’s high performance resources and expert requirements, to develop Indian shooting athletes for the two Games.

JSW Group will also provide NRAI access to its high performance resources and experts for training & developing shooters for both the showpiece events. The partnership opens doors for Indian Olympic shooters to be trained at the world-class Inspire Institute of Sport (IIS), a premier training facility established by JSW in Karnataka. The partnership agreement was signed by NRAI president Raninder Singh and JSW Sports director Parth Jindal.

Commenting on the Raninder said, “India has been a powerhouse in the world of Sport Shooting be it in terms of quality of talent or the tally of medals in various world level championships. Our association with JSW reiterates our commitment to provide Indian shooters with greater access to world class resources, experts and training facilities.”

“At JSW Group, we endeavour to achieve systemic growth and sustainable results. We realize that the most effective way to achieve this in developing sports talent is to enable and support systems. The NRAI has been one of the most successful federations over the past few years. They have managed to introspect and make changes to the status quo in order to improve athlete performances. It is with this goal in mind that we are partnering with NRAI as their high performance partner with an aim to support NRAI and all their staff – including coaches, physio’s, medical experts etc – who help an athlete perform to their best. This partnership will start from December 1st 2018 and go until 2024 Olympics,” added Jindal,

Over the last few years, Sport Shooting have become increasingly popular in India with more than 6,000 athletes participating in the recently held National Championships. The performances of the Indian shooting team have improved dramatically in the past decade, to transform the country into one of the dominant forces in world shooting. With India topping the medal tally for Shooting in previous Commonwealth Games as well as a individual Gold, Silver and Bronze medals in past Olympics, the right focus on training & development will ensure that India continues to remain a force to be reckoned with in the Sport Shooting world. While sports science and high performance development is still at a nascent stage in India, with this partnership between NRAI & JSW, the Indian Shooters can have more world class tools at their disposal.