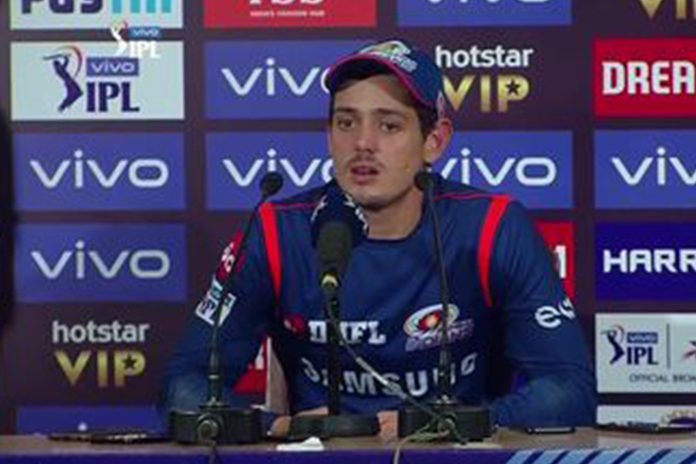 Mumbai Indians‘ Quinton de Kock has rued the lack of support for Hardik Pandya, whose incredible power-hitting kept Kolkata Knight Riders on tenterhooks till the final ball of the 18th over here.

Chasing 233, Hardik’s 91 from 34 balls kept MI in the hunt till his dismissal swung the game in favour of KKR at the Eden Gardnes.

“We would have loved a couple of less wickets when Kieron (Pollard) and Hardik walked in. But, unfortunately, it didn’t happen today so there’s the collapse and no one batting with Hardik made it harder for us,” the South African said at the post-match news conference Sunday.

De Kock got out without opening his account, after top-edging Sunil Narine in the second over.

“When you have to score of 233, you need to play one or two shots anyway. You have to try against any bowler who comes on and take a chance to get things going.

“So if I hit that ball for four or six, you probably would have said ‘great shot’ but unfortunately I got out so didn’t look,” he said about his slog-sweep.

The bowlers have too little in the batsmen-dominated format and De Kock said it’s more to do with the batting-friendly sub-continent wickets.

“In India they have generally very small fields, while wicket is batting friendly. Australia have bigger ground, while there’s a bit in the wicket for South Africa. Here it is more batting friendly anyway. Bowlers are always under pressure.”

De Kock further said he hated every minute of keeping to Russell who slammed a 40-ball 80 not out.

“I’m not joking, I hated every minute of it. You can’t fault him. He took his time, and then did what he does the best. You just have to appreciate what is done. Not just this game but in the IPL. Hope he doesn’t do it again against us,” he said.

Mumbai Indians will have a return-leg clash against KKR on May 5 which will be their last clash in the league round. Needing a win to seal a playoff berth, Mumbai Indians next face Sunrisers Hyderabad at home on May 2.