Nikhat Zareen World Champion: Whatever happens, happens for a good reason. Those were the words Nikhat Zareen kept telling herself after she lost the trials for the Tokyo Olympic Games qualifiers three years ago, following which she went home to “heal.” Follow InsideSport.IN For more updates

Zareen had famously written to the then Sports Minister Kiren Rijiju demanding a fair selection trial after the Boxing Federation of India decided to send the legendary MC Mary Kom directly for the Tokyo Olympic Games qualifiers in 2019.

“After the trial, I went home to relax my mind. Then (COVID-19) lockdown also happened, so I got to spend the whole of 2020 with my family,” the newly-crowned world champion told PTI.

“I was able to heal myself during that lockdown and get out of that zone. I enjoyed spending time with my niece, eating food made by my mom. I kept believing whatever happens, happens for a good reason.” 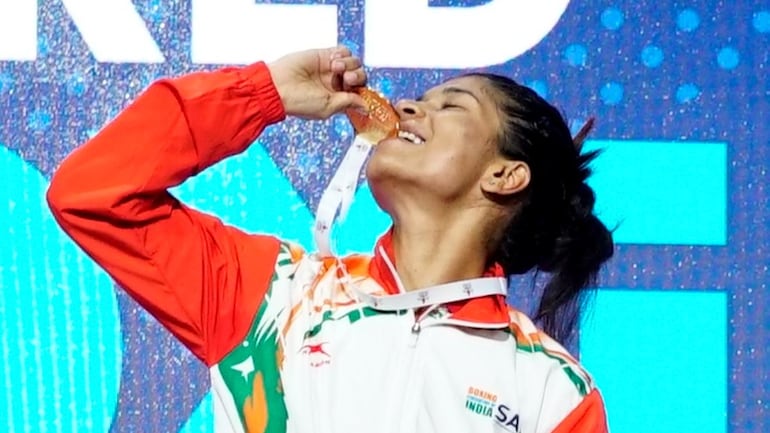 The trial had turned into a messy affair with a furious Mary Kom asking “Who Nikhat Zareen?”

Zareen eventually lost 1-9 to the veteran boxer during the trial, who refused to even shake hands with her young opponent.

“When things opened up, I went back to the camp, started training, beat the world champion which gave me confidence,” she added.

Turns out a little time away from the camp to be with her family was all Zareen needed to reignite her passion to win medals for the country.

Post the lockdown, Zareen has enjoyed a purple patch.

She defeated world champions Paltceva Ekaterina of Russia and Nazym Kyzaibay of Kazakhstan to bag a bronze at the Bosphorus boxing tournament in Istanbul last March, which was followed by gold medals at the Nationals, the prestigious Strandja Memorial and the World Championships, where she beat Thailand’s Jitpong Jutamas in the flyweight (52kg) summit clash on Thursday.

The 25-year-old is reaping the benefits of the hard work she has put in the past couple of years.

“New Nikhat has a lot of maturity and confidence and the hunger to win medals and fulfil her dream of winning medal at the Olympics.

“In the past couple of years, I have worked on my fitness. On my combination of punches. How to punch from a distance, attack, defend and re-attack.”

And it was a mix of some beautiful combination of punches that helped her outclass Jutamas.

Zareen feels the injury she sustained early in her career taught her a lot and also changed her approach to boxing.

“The injury played a major role in my career, I got to learn so many things. I became more alert and careful about being injury free. Since then I’ve avoided certain punches, so I don’t get injured again,” she said.

“After that I also worked on my strength. It was the first ever injury of my life and I had to undergo surgery. I was not ready for it. I wasn’t prepared. I would worry and get tensed as to what will happen.”

Taunted by naysayers at every stage of her life, Zareen says outside noise doesn’t affect her.

Coming from a conservative locality of Nizamabad, a young Zareen was taunted by her community members for taking up boxing and wearing shorts and a vest.

A few years later, when she injured her shoulder she was told “tujhse nahi hoga, chod de, itne competition jeet liye sport quota mei job mil jaega (Leave it, you can’d do it. You have won enough competitions to get a job in sports quota)”.

Zareen was also brutally trolled on social media for her fair trial appeal.

“It spurs me on (people criticising her). I take critique in a positive way and I always want to give everyone a proper answer that whatever they think can’t always be right.

“My career, life depends on me, I decide what to do. The same people now call my parents and say they are proud of me, ask when I’m coming back we want to meet her and take a picture.

“I don’t focus on the outside noise. What matters to me is my performance. It doesn’t affect me I am only working to fulfil my goal.”

Going ahead, Zareen will have to cut her weight down for the Commonwealth Games, where she plans to compete in 50kg, which is the same weight class in which she won her junior world championship.

“CWG only 50kg is there so no other options. So I will take part in that only and if my body is working well then I will continue. If not I’ll try to shift to 54kg.”

The 2019 Asian Championship bronze medallist is confident that 50kg will suit her as she will have the height advantage.

“It should not be difficult for me in 50kg because my natural weight is 51kg, I would have to lose only 1-1.5kg to come down. For me, it will also be advantage because I’ll have a good height and I’ll get short boxers.”

However, she has kept the 54kg, which is the next Olympic weight class, option open.