103-88 nets as we go to timeout early in the fourth. bucks haven’t been able to cut into this deficit with Durant on the bench, and that seems like bad news. hard to imagine how they outscore the nets by at least 16 points down the stretch

Blake Griffin has been terrific today. 18 points, 10 rebounds, and three assists. This was the best possible outcome when the Nets picked him up

98-84 nets at the end of the third quarter. bucks sort of collapsed there the last few minutes, but durant was also awesome. he’s up to 25 points and 10 rebounds. Giannis has 25 of his own to lead the bucks. The big difference so far, however, has been the role players. nets’ bench outscoring the bucks 20-6, and they lead by exactly that many points

Turns out to be a good challenge. bucks win and it will be a jump ball instead of durant shooting free throws

Lopez gets called for a foul on the block out and the bucks are going to challenge. Seems a little desperate but they might have a case

The bucks are 4-22 from three. they were able to survive game 1 vs the heat despite shooting horribly from three, but it’s a different story against the nets so far

Kyrie to the rim in transition and the nets have opened up a double-digit lead. The Bucks need to close the third quarter well to make sure this doesn’t spiral out of control

The Nets just sort of holding the bucks at an arm’s length in the third. bucks have not been able to get a stop and the nets are now in the bonus.

74-69 Nets as we head to timeout in the middle of the third quarter. both teams just getting whatever they want on the offensive end.

tv broadcast says that harden has already left the arena to go get an MRI on his hamstring. nets obviously wasting no time trying to figure out how severe his injury is

Kyrie for three and the nets have jumped back in front at 44-42. neither team can string together any stops right now

Block on Kyrie on one end. Beautiful assist on the other.

32-30 bucks at the end of the first. feels like they’ve played super well, but are only up by two. that, of course, is the problem with the nets. they have so much talent on the offensive end that they’re always going to be in the game.

P.J. to Giannis oop so nice… had to show it twice!! pic.twitter.com/mvxiix7qlD

Giannis back in and immediately throws down a dunk, then lopez crashes the offensive glass for a putback. The Bucks are dominating in the paint, as expected. nets just don’t have a serious presence down there

24-21 Bucks as we head to timeout with 3:19 left in the first quarter. if you missed it earlier, harden went back to the locker room with a possible re-aggravation of his hamstring injury. bucks have been playing super fast and have jumped out to an early lead. 13 points for giannis and pj tucker. 13 points for kyrie and durant

Brook Lopez inside is gonna be one of the big mismatches of this series. That dunk was downright easy for him. Look for the Nets to try to isolate him in space defensively to get him off of the floor.

Giannis made 10 3’s in his three games against Brooklyn during the regular season, but the Nets are still going to let him shoot. He missed his first attempt from behind the arc there.

It looks like Harden was reaching for his right hamstring on that opening drive and kick. That was the hamstring he injured during the season. He missed 21 games this season due to that injury.

Giannis is guarding Kyrie to open this game. Very unusual choice on several levels, but without Donte DiVincenzo, the Bucks had to get a bit unconventional.

From start to finish, there were three great teams in the Eastern Conference this season. The Philadelphia 76ers earned the top seed, so it’s the Brooklyn Nets and Milwaukee Bucks in the 2-3 series on the other side of the bracket.

The Bucks have already exorcised their demons by sweeping the Miami Heat in the first round, but they didn’t make big changes and with all their talent, the Nets have the highest of expectations. 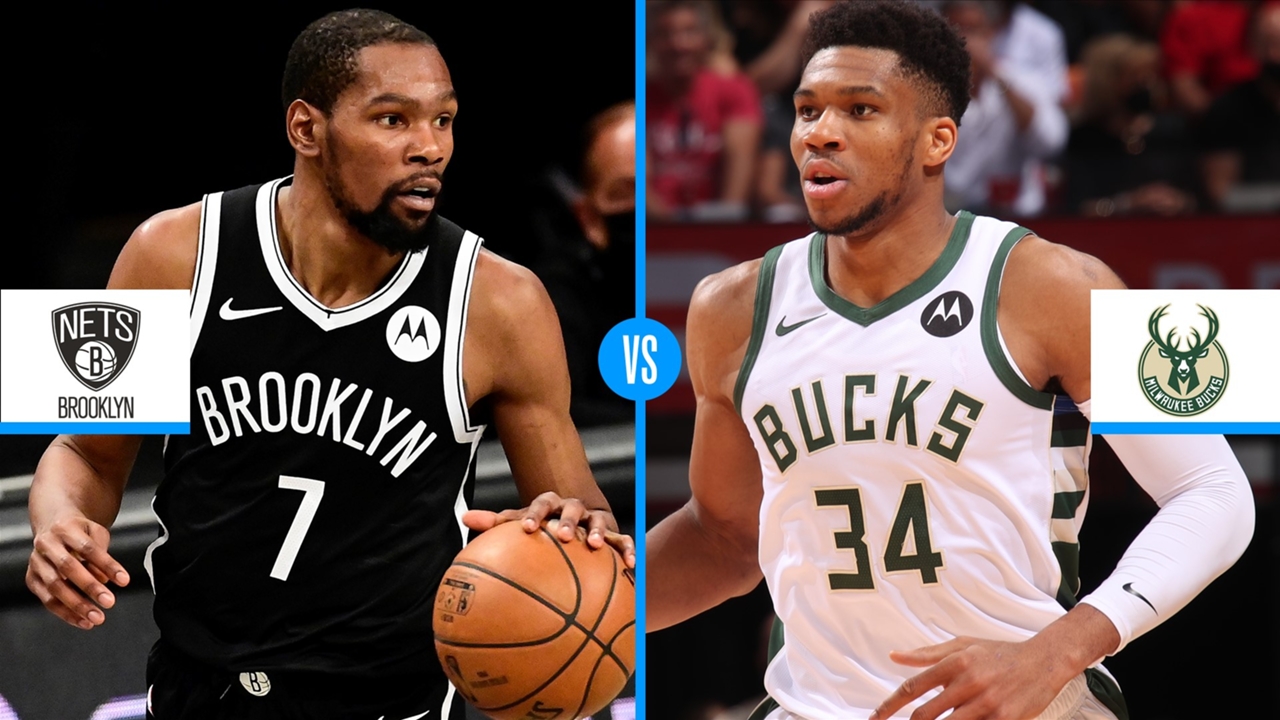